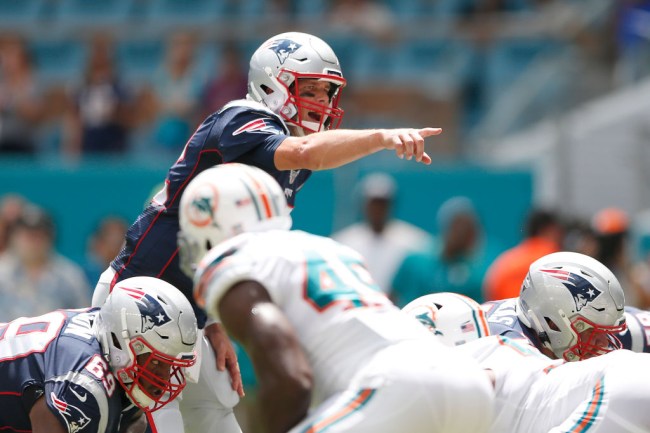 There has been plenty of speculation about what Tom Brady’s future may hold after this season. Retirement has been tossed around as a possibility for the 42-year-old, but he’s shut down those rumors in the past. There’s also a thought of him moving on from New England and finding a new home in the NFL, and one Patriots insider has an interesting thought about that possible scenario.

Tom E. Curran of NBC Sports Boston seems to think that Miami makes a lot of sense for Brady. He joined The Rich Eisen Show and laid out his reasoning behind the idea.

If not in New England, where might @TomBrady be playing in 2020?@NBCSBoston @tomecurran has some ideas, including one we didn't expect: pic.twitter.com/f3gLF6OpmS

“Honestly, Rich, knowing who he is, since he’s been in the public consciousness for 20 years and more, he wants to be able to prove something to somebody who thought that he couldn’t do something. That he was unable to continue at a level. And that’s why I keep coming back to the Miami Dolphins as a possibility.”

While it may be a stretch of pinpointing Miami as Brady’s next and likely last stop of his career, but there’s definitely been worse ideas tossed out there.

Curran’s breakdown of the coaching staff and front office with Michigan man and friend Stephen Ross in charge as an owner and former Pats staffer Brian Flores in charge there would certainly be some familiarity there for Brady.

It would be bizarre to see Brady as a Dolphin for a lot of reasons, but seeing him in Miami playing for a team he’s dominated over the years would be a sight to see. Brady has gone 23-11 against the Dolphins in his career. One would think Dolphins fans would be against this move if it does materialize into something given the past, but then again this is a man that’s won six Super Bowls while the Dolphins haven’t won a playoff game since 2000.

Brady’s current contract runs through 2021 where he’ll make $32 million that season so none of this happens unless he and the Patriots decided to go their separate ways.