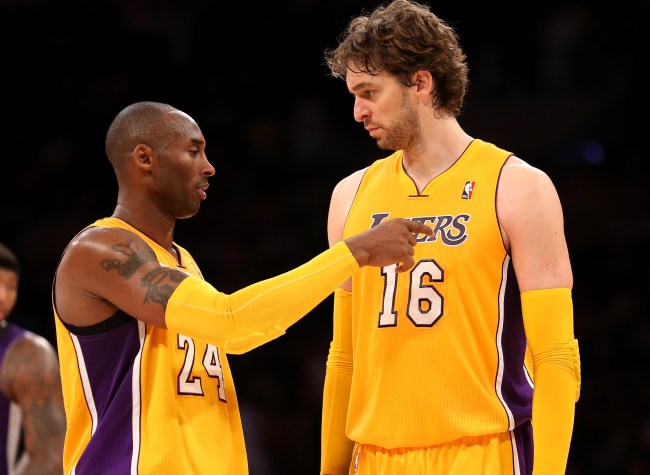 When Pau Gasol teamed up with Kobe Bryant on the Los Angeles Lakers during the 2008 season, the two formed a duo that took the roster from a playoff team to a championship contender, with the Lakers reaching three-straight NBA Finals’ from 2008-2010, and winning two of those. While Bryant was the more vocal leader and shared the same type of intense competitiveness as Michael Jordan, Gasol seemed to need to be pushed in order to get a similar relentlessness — and Kobe found a unique comparison in order to do it.

While talking to the Spanish publication La Resistencia, Gasol detailed Bryant’s nickname for him during their playing days together — which was inspired by former Colombian drug lord Pablo Escobar — and why the five-time NBA champ used the reference as a way to motivate his teammate. Take a look below at Pau Gasol’s explanation.

“[The first one was] the ‘Spaniard’ from [the movie] Gladiator, and they were playing the movie soundtrack and everything.

“Kobe always tried to get my inner fire out and he called me Pablo because of Pablo Escobar.

“Not because he was a drug trafficker, but because of that murderous instinct. To [help me] get that aggressiveness, he compared me to him.”

That’s a pretty fucking ruthless nickname for Gasol from Bryant. After all, Pablo Escobar was a cold-blooded murderer and cocaine kingpin who was once one of the DEA’s and the FBI’s most-wanted people during the early ’90s, so for Kobe to suggest that his teammate needed that type of killer mentality while playing basketball goes to show the unapologetic way Bryant would push his guys.

While the nickname for Pau Gasol is a little bit strange, it did end up working out for he, Kobe and the Lakers, because the team saw tons of success when the two were paired together — so the reference to Escobar sure didn’t seem to bother Gasol much.