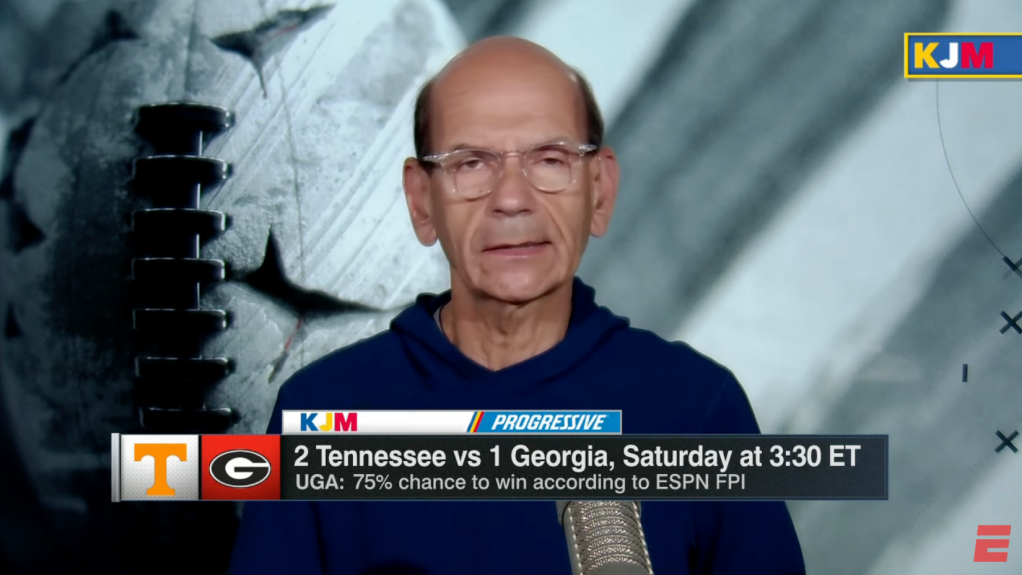 The first College Football Playoffs rankings will be revealed by ESPN on Thursday, November 1. The CFP rankings rarely mirror the AP Top 25 or Coaches Poll with some shakeups throughout.

On Thursday morning, ESPN’s SEC insider Paul Finebaum joined Keyshawn, JWill and Max Kellerman to discuss his own rankings. He also went a step further and revealed how he thinks his rankings might differ from what the College Football Playoffs Committee comes up with and then in the process, he took a swipe at Alabama after their performance against Tennessee.

First up, here is what Paul Finebaum’s top-4 rankings look like:

In this clip, he explains how he thinks it’s possible Tennessee’s win over Alabama moves them higher than #3 and possibly as high as #1. Then the conversation turns to this week’s matchup between #2 Tennessee and #1 Georgia in Athens.

Finebaum used this moment to take a swipe at the Alabama Defense’s complete impotence in stopping Tennessee’s star wide receiver. He says “obviously anyone can do a better job than Alabama” and added “that was laughable” when referring to Bama’s attempts to contain Tennessee’s offense:

If you didn’t watch the clip, Paul Finebaum believes Georgia’s defense will be the difference maker against Tennessee.