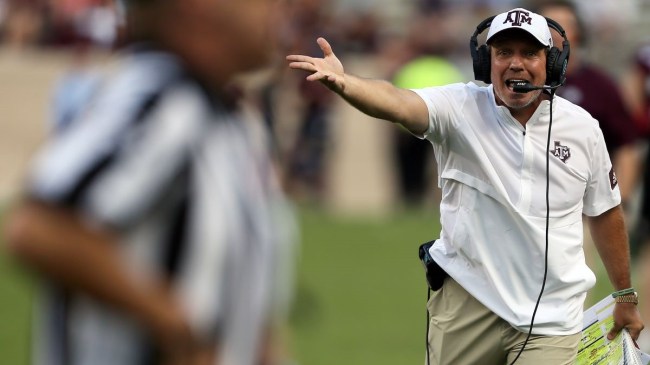 Jimbo Fisher’s tenure as the head coach of the Texas A&M Aggies has been nothing short of a downright disaster. Fisher signed a 10-year, $75 million deal with the university in 2017 after winning a national championship at Florida State. He then signed a 10-year extension for $90 million after the pandemic shortened 2020 season, in which he led the Aggies to a 9-1 record.

But Fisher’s overall record through nearly five full seasons in College Station is just 37-21 and he’s just 3-7 in 2022. That is despite signing an all-time great recruiting class earlier in the year.

Texas A&M’s horrendous 2022 season includes a number of embarrassing moments on and off the field. First, the Aggies lost to visiting Appalachian State in a game they paid the Mountaineers $1.5 million to play. Shortly thereafter, five-star freshman cornerback Denver Harris was caught speeding recklessly through a campus parking garage while streaming the incident on his phone. Fisher also suspended Harris twice this season for separate incidents.

Fisher still has nine years remaining on his contract extension. If the Aggies were to fire him, it would cost them $86 million. And SEC media personality Paul Finebaum doubts if they could actually afford to pay it.

Finebaum then stated that the horrific 2022 season has cratered Fisher’s credibility.

“His credibility is at the bottom,” said Finebaum. “He’s easily done the worst coaching job of anyone in college football this year.”

For all the struggles, this is Fisher’s first season under .500 with the Aggies. But Finebaum also believes that many members of that 2022 class could hit the transfer portal following the season, If they do, it’s hard to see how Texas A&M could afford to keep the big-name head coach around.