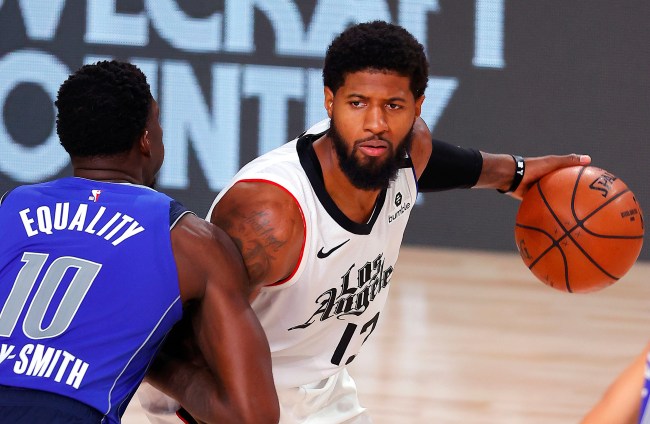 Paul George through last three bubble playoff games: The first player ever to shoot under 25% in 3 straight playoff games since Bob Cousy in 1960.

Paul George Game 5: The only player in NBA postseason history to score 35 points in 25 minutes or less in the Shot Clock Era.

George’s performance 35-point performance in the Clippers 154-111 rout of the Mavs Tuesday night was fueled by the wrath of NBA Twitter, who ruthlessly mocked the six-time All Star for a three-game stretch that could best be described as Philip Seymour Hoffman in Along Came Polly.

Paul George on IG getting ready to post “A lion doesn't concern himself with the opinion of sheep.”pic.twitter.com/SLVpF1R7WH

After the game, George spoke about being in a “dark place” exacerbated by the isolation of the bubble.

“The bubble got the best of me,” George admitted. “I was just in a dark place. I really wasn’t here. I checked out. These past couple games, it was just difficult. But, shout out to the people who stood behind me, that was in my corner. The positivity, my family, friends. Everybody. Thank everybody that reached out to me.

“I was just in a bad place. I found my way, I’m back, and I look forward to the rest of this run,” he said.

George claimed he talked to a psychiatrist after his three-game slide, and underestimated his mental health.

“I had anxiety and a little bit of depression. Being locked in here (in the bubble), I just wasn’t there. I checked out.”

“For me, it was just hard to get into that playoff mode with no intensity here, no fans, no atmosphere. I was lost. I thought we created the energy. I came in with that mindset that this is Staples, we at home, the place is packed. I really had to psych myself out to get up. I thought the whole team took it and ran with it, and we decided to dictate this game.”

“The bubble got the best of me… Shout out to everyone who stood behind me."

Paul George on his start to the playoffs. pic.twitter.com/eleprREKT9

The Clippers look to close out the Mavs in Game 6 on Thursday.