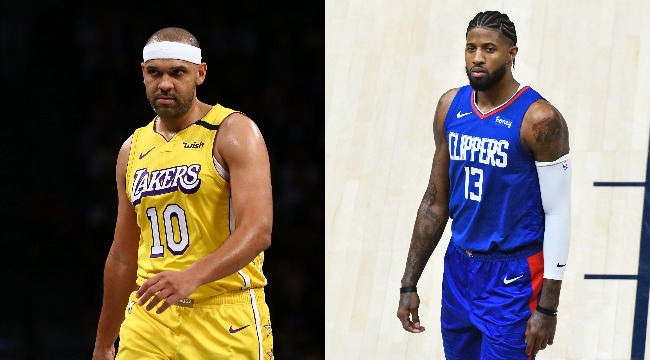 The World: We would really appreciate the quick and effective distribution of vaccines.

The Universe: Here is a book by Lakers 15th man Jared Dudley.

Jared Dudley is a study in contradictions. The dude is an NBA Champion, but has the body type of a mall cop. He’s played alongside some of the greatest players of our generation—LeBron, Shaq, Steve Nash, Giannis—yet he himself has never sniffed an All-Star game. He’s averaging a half a point per game this season, but at the moment he’s the most talked about player on the best team in the league.

Now he’s an author. And that’s more than Jordan can say.

Dudley released his new book, Inside The NBA Bubble, on Kindle—a 42-page behind-the-scenes account of the NBA lockdown at Disney World.

Jared has gone viral today, not for his linguistic prowess, but for the shots he’s taken at the team that shares his city.

We don’t talk to people on other teams. As far as we’re concerned, our squad is the only squad. We know that there are some real feelings regarding the Clippers. It’s more than just battle-for-LA stuff, though that’s part of it.

We hear some of those guys talking about how they’re the team to beat in LA. It’s fine if Kawhi says stuff like that. He’s defending a championship. We don’t trip if someone like Patrick Beverley is talking trash; that’s how he feeds his family. We get it. We respect the hustle.

Dudley then turns his aim at Clippers star Paul George, who he believes to overrate himself.

But we think it’s disrespectful for Paul George, who hasn’t won, to put himself on the level of Bron and AD. This motivates us. When we see those guys around the compound, we don’t really kick it with them. The one exception of course is Markieff, whose twin brother, Marcus, is on the Clippers. This probably keeps tensions from boiling over.

The comments have sent Twitter ablaze and have found their way to the ears of Paul George, who doesn’t appear to want any smoke with the NBA Champion and published author.

Paul George on Jared Dudley's book comments against him: "God bless him. God bless you, Jared Dudley. I don't know what it is, dudes love throwing my name in stuff." pic.twitter.com/sDAtWYfwTq

Can someone remind Jared Dudley that he’s been on the Lakers for like 22 months and 60% of those games were in Orlando?

"Lakers will always be LA," Jared Dudley said. Added it wouldn't change even if the Clippers win 10 championships in a row.

With 10 first quarter points, Paul George had already tripled the amount of points Jared Dudley has scored this season.

Perk is ready to die on the Jared Dudley hill.

Listen, if anyone has the right to speak on anything regarding his experience in the NBA, it’s Jared Dudley. Mr. 13 year Vet, Ultimate Professional, ACC POY and NBA Champion… he can write about whatever the hell he wants!

Check ya credentials b4 you speak on it, carry on….

This is why the NBA is unmatched.