Paulie Malignaggi Calls Conor McGregor A P***y In Wild Rant, Tells Him To Back Up His ‘Big Talk’ 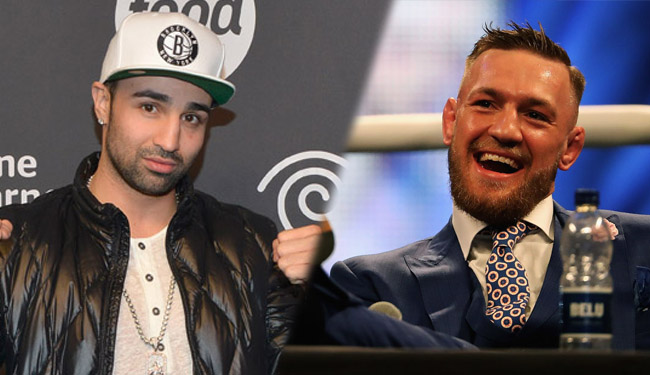 It has been well-documented how much former two-time boxing world champion Paulie Malignaggi dislikes his former sparring partner Conor McGregor. After Malignaggi quit McGregor’s camp prior to the Floyd Mayweather fight he’s been talking non-stop about “The Notorious One” saying things like McGregor has “no balls” and “whimpers like a girl” when punched to the body.

McGregor claimed last week that if he were to get a rematch with Mayweather he KNOWS he would win and then later complained about referee Robert Byrd, saying, among other things, “He had a vendetta against me straight off the bat.”

Gotta back up all that big talk you had IN THE RING now, men back up their words while pussies are all talk. Time to back it up now #NoBalls https://t.co/Tue7qS5XVu

Pitiful isn't it? I dunno what's more pitiful, him talkin bout me now or his poor fans starting to understand the reality of that spar sesh. https://t.co/vUpKmdzCog

https://t.co/YujHJmcGjf Ref let u get away with all kinds of fouls, next time punch back u bitch, easy 2 talk tough when it's over #NoBalls

It is, that's why I told him to his face to bring his balls. He tends to forget those. He's talking, gonna need balls to back his talk up. https://t.co/zFMXostSbR

Exactly. Plus we all get tired late in the fight. Only those with no balls outright stop fighting back though so Ref can stop the fight. https://t.co/CM0zLzgGLO

This guy's funny. I give it 2 him he's got a good editing team that can edit an ass whippin he takes so it can cover up his bitchassness. https://t.co/OSAObdIbW3

Leave Conor alone? What am I a bully? The guy brought ME up in his last public interview what the fuck is there to leave alone? https://t.co/x8lBnfEaBg

Later, speaking with EsNews, Malignaggi continued his tirade against McGregor…

“You talked all this shit about how you handled it in the cage, now not only are you not releasing the video, but now you want to not box either? Nah, he doesn’t want it that way. You’ve got to be a man and prove yourself. You’ve got to show what kind of balls you’ve got. It’s easy to talk all that shit, now since it was so easy, you’ve got to box and you’ve got to prove it. No, we’re not going in a cage because that’s not where you “handled me.” You “handled me” in the ring, right? So now go and prove it.

“He’s got to man up now. He’s got to stand up for what he said or he’s gonna continue to prove what I said about him, that he’s got no balls.”