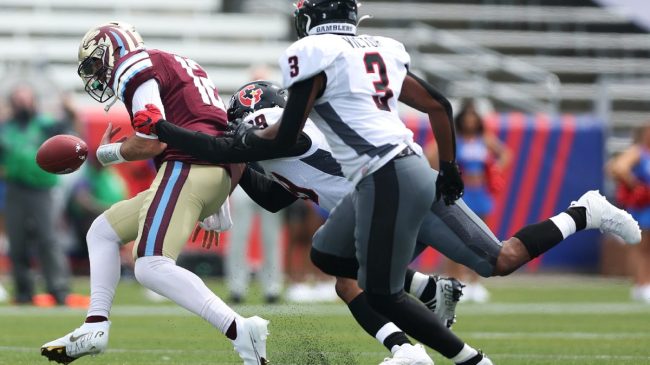 Paxton Lynch was a first-round selection by the Denver Broncos back in the 2016 NFL Draft.

A record setting quarterback at Memphis, Lynch came to the league a little raw, but with a ton of potential. And his 6-foot-7, 250-pound frame had GMs salivating when draft day came around.

Unfortunately, his NFL career didn’t last as long as he would’ve hoped.

Lynch saw action in five games between 2016 and 2017, making four starts in Denver. The Broncos lost three of those four starts with Lynch throwing as many picks as he did touchdowns. After bouncing around from team to team after that 2017 season, Lynch opted to make the move to the USFL.

While he didn’t win the starting job over Shea Patterson, Lynch did see some action in Sunday’s matchup between the Michigan Panthers and the Houston Gamblers.

Lynch entered the game in the second quarter with his Panthers already down 11-0. He came in to replace starter Shea Patterson but wasn’t able to close the gap for Michigan.

Paxton Lynch is now in at quarterback pic.twitter.com/a0Add7bRtk

Immediately upon entering the game, Lynch fumbled. He was able to recover but couldn’t move the ball any further in the drive and the Panthers punted.

Michigan got the ball back three plays later, only to see their passer fumble again. This time, with the Gamblers making the recovery. They’d score six plays later to open up a 17-0 lead.

Things would get worse for Lynch before they got better. He threw an awful interception on his next drive, right as commentator and former NFL head coach Jason Garrett got done comparing him to Josh Allen.

Ouch! Not the best debut.

Lynch finished the day with one yard on 2-of-5 passing and that interception. His quarterback rating was a mere 1.7.

Making things worse, Lynch appeared to be having some difficulty with his headset, which obviously made an already frustrating day more so.

Lynch’s day ended in the second quarter as he was replaced by Patterson after three miserable drives. Folks on social media let the quarterback have it after the game.

Paxton Lynch has fumbled 16 times in this first half, I think.#USFL

Hopefully his next appearance goes a little bit better.