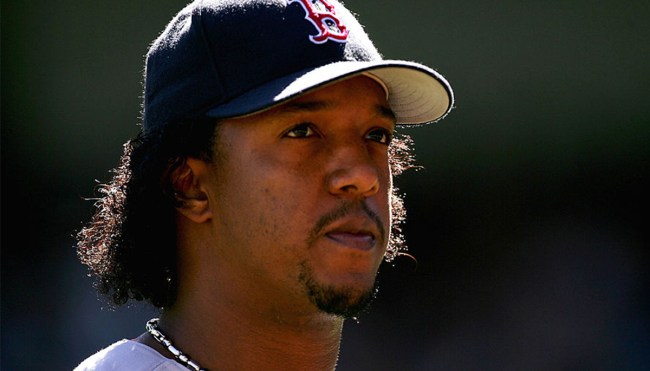 Plenty of sports teams have been at the center of some particularly heated rivalries, but I’m not sure if any two franchises have shared the degree of bad blood that flowed whenever the Red Sox and the Yankees faced off in the early 2000s.

In 2004, the Red Sox brought their 86-year World Series drought to an end after topping the Bronx Bombers in what is probably the most legendary ALCS series in baseball history. After losing the first three games, the Red Sox managed to claw back thanks to a clutch steal from Dave Roberts, a walk-off home run from David Ortiz, and the gutsy performance of Curt Schilling during the “Bloody Sock Game” before finally breaking the Curse of the Bambino after advancing to the championship round.

The stakes were especially high heading into that showdown thanks to what unfolded when Boston and New York faced off in the ALCS the previous year. That series ended when Aaron Boone hit a walk-off home run of his own against Tim Wakefield, but it’s probably best remembered for a couple of ugly incidents that unfolded at Fenway Park in the third game.

In most games, a Red Sox fan jumping into the bullpen to try to fight the opposing team would be the most notable clash.

However, that was overshadowed by what went down in the fourth inning. After Pedro Martinez threw at Karim Garcia in the top of the frame, Roger Clemens went high and inside on Manny Ramirez—which the Red Sox slugger did not appreciate. This led to the benches clearing, and while it appeared things had settled down, they escalated very quickly after Martinez chucked 72-year-old bench coach Don Zimmer to the ground.

The Red Sox ace recently appeared on Bleacher Report‘s “Untold Stories” to reflect on the incident and shed some light on the series of events that led up to it.

“I threw a ball behind Karim Garcia because my shoulder was hurting. I had men on first and second. Karim Garcia is the ninth-place hitter. I’m trying to rush a fastball up and in on him. I’m dragging. I’m tired. I’m aching…

The ball came behind him, so when he ducked down, the ball hit the bat. It looks like it was over his head.  So Zimmer took exception to that. They started yapping. I continue to pitch, got a ground ball, double play. But when Karim Garcia is going to second, he almost kills the second baseman. I said, ‘What are you thinking? It’s a 3-2 game. Who wants to hit you? You crazy? Clean it up.’

So Posada popped up. Zimmer popped up. Everyone started yapping at me.

I got the inning done. Roger Clemens throws the ball at Manny, and Manny was angry and yapping. I’m in the bathroom. When I came out, the brawl was already happening. I’m zipping up my pants quickly and trying to see what’s going on. That’s when I hear the mumbling behind me.

I see Zimmer rushing towards me, and I’m like ‘What?’ That’s when he got close to me, said some bad words that I didn’t expect from Zimmer. He actually tried to jab me, so I pulled him, and that’s why it looks like I grabbed him.

That’s the only blemish I would love to erase from my career. There hasn’t been any other moment where I felt worse.”

It seems like Martinez is pretty repentant about what went down, as he’s previously expressed his regrets about what happened. That might not stop Yankees fans from holding a grudge, but at some point, you have to let bygones be bygones.