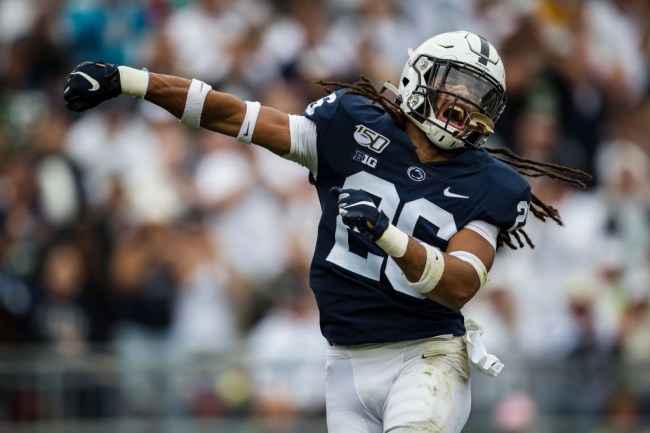 If you’ve ever been unfortunate enough to spend more than 17 seconds browsing a message board dedicated to college football, you’re probably aware that the idiocy of people who get way too invested in the sport knows literally no bounds.

Earlier this week, Penn State football player Jonathan Sutherland was at the receiving end of some impressive dumbassery courtesy of a lifelong Nittany Lions fan who decided to spend far too much time writing a letter to the player to express his (and his wife’s) displeasure with his decision to have dreadlocks—a letter that his teammate Antonio Shelton posted on Twitter.

One of my teammates got this. Explain to me how this isn’t racist. pic.twitter.com/Qms1F6DEEP

While I’ll let you come to your own conclusion concerning whether or not the letter was racially motivated, I think we can all agree that Mr. Peters is incredibly out of touch when it comes to keeping his finger on the pulse of the zeitgeist.

After the letter began to make the rounds online, Penn State AD Sandy Barbour went to bat for Sutherland.

I stand with our Penn State student athletes and appreciate how they represent PSU in competition, in the classroom and in the community. Their dress, tattoos, or hairstyle has no impact on my support, nor does their gender, skin color, sexuality or religion! #WeAre #ONETEAM🦁

However, she’s far from the only person who has his back, and on Tuesday, Penn State head coach James Franklin decided to chime in and didn’t mince words when it came to sharing his feelings on the matter.

James Franklin with an important and emotional message regarding a fan’s racist letter sent to PSU safety Jonathan Sutherland. pic.twitter.com/z2TFlWKs3m

“The football that I know and love brings people together and embraces differences. Black, white, brown, Catholic, Jewish, or Muslim. Rich or poor. Rural or urban. Republican or Democrat. Long hair, short hair, no hair.

They’re all in that locker room together. Teams all over this country are the purest form of humanity that we have. We don’t judge. We embrace differences. We live, we learn, we grow, we support and we defend each other.

Penn State football, Penn State University, and Happy Valley provide the same opportunities to embrace one another twelve Saturdays each fall. PSU football brings people together like very few things on this planet.

This is my football. This is the game that I love and, most importantly, my players that I love and will defend like sons. Ultimately, this is the definition and embodiment of what “We Are” is all about.

Lastly, Jonathan Sutherland is one of the most respected players in our program. He’s the ultimate example of what our program is all about. He’s a captain, he’s a dean’s list honor student, he’s confident, he’s articulate, he’s intelligent, he’s thoughtful, he’s caring, and he’s committed.

He’s got two of the most supportive parents and I would be so blessed if my daughters would marry someone with his character and integrity one day.

Now back to Iowa.”

According to The Tribe-Democrat, the letter in question was written by a man who graduated from Penn State in 1966 (shocker) who said he didn’t intend for this letter to come off as racist but that he “would just like to see the coaches get the guys cleaned up and not looking like Florida State and Miami guys.”

Something tells me Dave isn’t going to see his wish come true.