11,000 People Illegally Watched The KSI vs. Logan Paul Fight Through The Reflection Of A Streamer’s Glasses 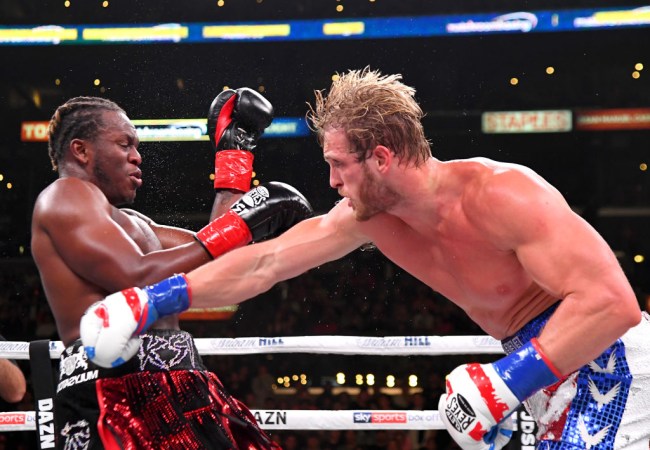 Popular YouTubers KSI and Logan Paul stepped into the ring together for the second time on Saturday night. While their first fight – which was an amateur event – back in August of 2018 resulted in a draw, KSI earned the win in the highly anticipated second professional bout.

The fight was streamed on DAZN and while neither KSI or Paul’s teams have released any information about the streaming numbers, we do know some viewership numbers thanks to the reflection of a YouTuber’s glasses.

Piracy of their first fight was a major issue back in 2018, but this time around YouTube acted swiftly on anyone trying to live-stream the fight to viewers and removed the content. One stream appears to have slipped through the cracks, however.

A man filmed himself watching the fight, as a live-reaction type of stream, but the kicker here is that he was wearing glasses. The glasses reflected the fight off of his computer screen perfectly and people caught on as up to 11,000 people watched the fight.

That’s correct, there were 11,000 humans on Saturday night watching two YouTube personalities box through the reflection of some man’s glasses.

To stream the fight legally, which is what everyone should have done because hey it’s 2019, you had the option of signing up for DAZN with a $19.99 monthly subscription or $99.99 for a yearly subscription.

Either the man with the glasses came up with this wild idea to illegally stream the event or he simply hopped on a YouTube live stream to literally react to the fight and the pieces fell in the right place for him to earn a massive amount of viewers.

Shout out to everyone who streamed the Logan Paul Vs. KSI fight 👏👏👏

Even if we had to watch the reflection off of your glasses #loganpaulvsKSI2 pic.twitter.com/Ab6kaTkSs8

Shout out to everyone who streamed the Logan Paul Vs. KSI fight 👏👏👏

Even if we had to watch the reflection off of your glasses #loganpaulvsKSI2 pic.twitter.com/Ab6kaTkSs8

Bruh I was watching the KSI vs Logan Paul fight through this guys glasses 😂😭 pic.twitter.com/tQWDp3scuA

Paul and KSI reportedly pulled in $11 million of revenue with their first fight last year.