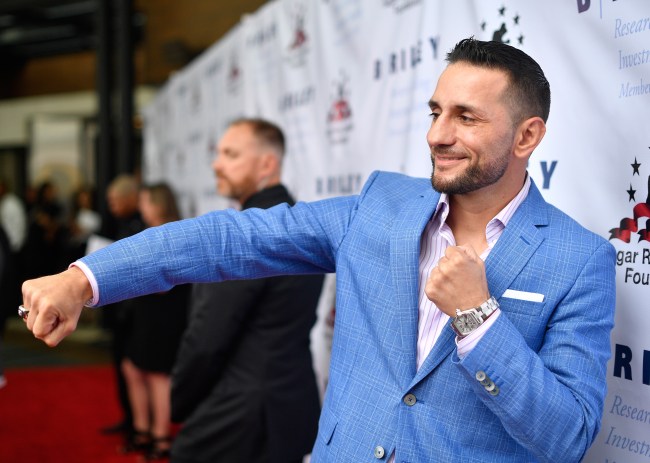 This weekend, DAZN, the sports streaming app that is home to Canelo Alvarez, GGG, and will be streaming this year’s highly anticipated Andy Ruiz-Anthony Joshua rematch, is going coast-to-coast on back-to-back nights with two cards that feature some of the fastest rising stars in the boxing game in Devin Haney, Jaime Munguia, and Ryan Garcia.

What’s up Sergio, what do you think about the recently announced fight between the two Youtube stars Logan Paul and KSI on DAZN? The fight has been getting some backlash from boxing fans who feel the integrity of the sport is being tarnished. As a fighter yourself, how do you feel about two non-boxers headlining a boxing match?

‘It’s funny man because I’m not part of the internet phase you know, I grew up without internet, I’m almost 40 years old so I’d be lying to you if I told you If I had heard of Logan Paul or KSI but once I started doing research I realized how many followers they have I realize the impact they have worldwide.

I realize why hardcore boxing fans are upset but then as a promoter and as someone who wants to build the sport and market it to fans outside of boxing to make it a more popular sport for younger audiences. The problem with boxing is that it’s not a young sport, it’s mostly for older people. If you want to bring a young audience that’s new to the sport, then why not, just make it happen.”

Last week Andy Ruiz and Anthony Joshua had their press tour for their rematch. Joshua was a huge favorite when he lost to Ruiz the first time, who do you think has more pressure to win this fight this time around?

“By far all the pressure is on Anthony Joshua, I mean this is it for him, if he gets stopped again I don’t see him recouping from that, not only mentally but physically. Back to back losses is too muck, especially if it’s going to be another knockout, I just don’t see he’s career recuperating.

You know I saw videos online of Joshua talking about he was being burnt out by the sport mentally and physically and if he gets knocked out back-to-back like that he’s going to be done mentally and physically. It’s not like he can’t recoup by fighting lesser opposition afterward to get back to the title, yeah he can do that, but can he mentally do that? Probably not. This is do or die for him as far as his career goes. He has to beat Andy Ruiz, and it doesn’t have to be a sensational knockout, he just needs to get out of there with a convincing win.”

On Saturday night WBO junior middleweight champion Jaime Munguia will be defending his title against Patrick Allotey. Munguia is looking to bounce back after escaping with a controversial decision win against Dennis Hogan. How important is it for Munguia to impress this weekend and how much pressure does he have on himself to look good in the ring after the Hogan fight?

“He’s going to want to defend his undefeated title and his undefeated record. He’s going to want to prove that having legendary boxer Erik Morales in his corner is going to make a difference in his defense and his ring generalship and controlling the pace of the fight. He has a lot to prove in those aspects but as far as his career do or die, that’s not the case. He’s young, he’s hungry, he’s a big fighter and he’s probably not going to be fighting at 154 much longer, the weight cut could have affected him during his fight with Hogan. A lot of people are going to want to know what kind of fighter he still is at 154, if he can still be a menacing 154 fighter that he’s always been or if he has to vacate and move up to 160”

Alright, Devin Haney is fighting undefeated Russian boxer Zaur Abdullaev on Friday night’s DAZN card. Haney is a social media star, has been dubbed the next Floyd Mayweather and has called out champion Vasyl Lomachenko, Is Haney really as good as the hype makes him out to be?

“He’s the goods and here’s the thing that makes Devin Haney special and it’s not the fact that he’s young and he’s good looking, he’s a great boxer, and has momentum and has an excellent team behind him.

He has everything going for him, but the main thing that I’m really impressed by with is his maturity. When we interview him, when we talk to him inside and outside of the ring, the way he handles himself, the way he’s composed when he talks to the media at press conferences, he’s just a mature young future champion. He’s a future superstar, he says everything right, he does everything right, he backs it up with his devastating knockouts. Him, Ryan Garcia and Virgil Ortiz are definitely the future of the super lightweight and lightweight division. ”

Like Haney, Ryan Garcia has garnered a large social media following with his engaging personality and boxing skills. The 20-year-old boxer will be fighting Avery Sparrow on Saturday and many feel like he’s next “Golden Boy” of boxing. Where is he at in his career right now and what’s his potential going forward?

Keep your eye on it pic.twitter.com/v6jZuTAHa4

“He’s exciting to watch, he has fast hands, he has that power punch that’s been taking guys out with and he has a massive following on social media which is always important. He’s one big win away from being respected like the Haneys and the Ortiz Jr.’s of the world. He’s a special young talent, and he’s probably one or two fights away from a title shot to becoming champion and headlining is own event.:

All fights this weekend will be on DAZN, Download the app on your TV or connected devices and catch all DAZN live events, including Gennadiy “GGG” Golovkin against Sergiy Derevyanchenko, and the highly anticipated heavyweight rematch featuring Andy Ruiz vs. Anthony Joshua. You can create an account directly through the app or on your browser at www.DAZN.com.