Pepperdine Golfer Drains Tournament-Winning Putt While Wearing Kobe Bryant Jersey: ‘I Did It For Mamba’ 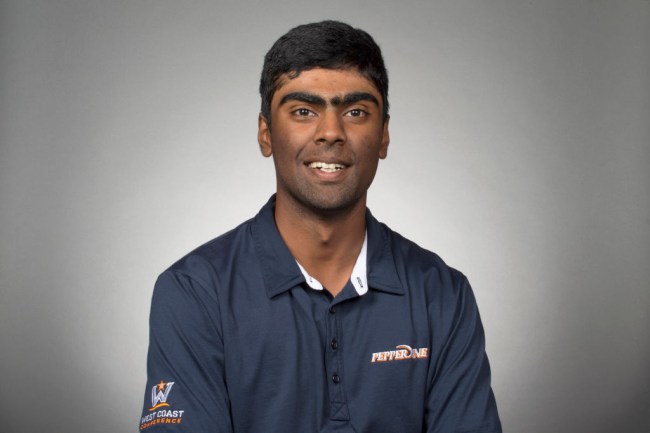 The tragic passing of Kobe Bryant, his daughter Gianna and seven others this past weekend is affecting people on all corners of the globe and in every sport.

The shocking accident is affecting people on various levels, but for Pepperdine senior golfer Sahith Theegala, it’s had a unique impact.

According to Golf Channel, Bryant’s helicopter crashed less than a half-mile from Theegala’s apartment. The Chino Hills native’s idol growing up was Bryant.

“Those were my earliest memories of watching sports,” Theegala said. “My dad tells me stories. I would cry when the Lakers would lose and Kobe would have a bad game.”

Theegala will also never forget Sunday. He was playing a practice round for the Waves’ spring opener, the Southwestern Invitational, at North Ranch Country Club when about 10 miles away Bryant, his 13-year-old daughter Gianna and seven others died in a helicopter crash in the hills of Calabasas, less than a half-mile from Theegala’s apartment off Los Virgenes Road.

Theegala was able to pay his respects in an incredibly awesome moment, however. During his final round of the Southwestern, a college event in Westlake Villa, CA, he carried a No. 8 Kobe jersey on his bag for the entire round.

Fast-forward to the final hole on Tuesday and after finding the green, Theegala needed just two putts to win the tournament. Just before two-putting for his par, Theegala threw on his Kobe jersey and won the tournament with his favorite player’s name on his back.

Do it for Mamba!

Wearing the jersey of the late @kobebryant, @PeppGolf senior Sahith Theegala makes par on 18 to win the @SouthwesternInv. pic.twitter.com/xUM58vCTZX

“The Mamba mentality that he had all the time, I tried to instill that in myself, and I don’t know if I ever can, especially to his level; I don’t know if anyone ever can,” said Theegala, who battled back from a serious wrist injury suffered in August 2018 that kept him out a whole year and forced him to redshirt last season. “That really meant a lot for me to be able to do that on 18.”

Theegala made seven birdies before heading to the 18th tee on Tuesday. The win was his third in his last four tournaments and with the victory, he should move inside the top 10 of the World Amateur Golf Ranking.