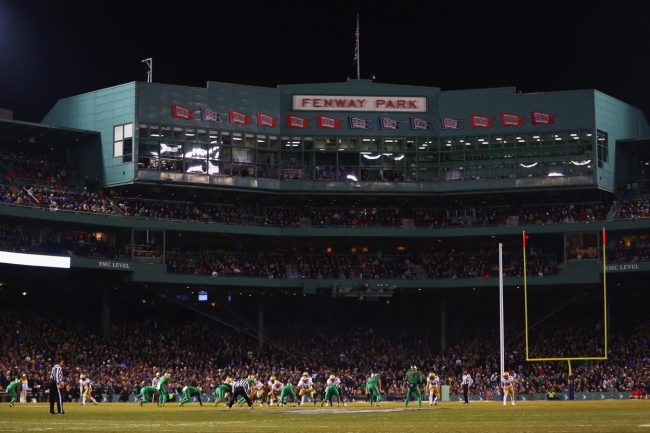 College football bowl season isn’t quite going as planned, but that didn’t stop three famous MLB stadiums from turning into a beautiful setting for football. The Padres, Red Sox and Yankees had their field transformed into a gridiron and all three turned out picturesque.

The Holiday Bowl was set to be the first of the three games played in 2021.

In previous years, the game was held at the Chargers’ Qualcomm Stadium in San DIego. However, that field is permanently condemned, so that wasn’t possible this year.

In turn, the bowl game pivoted and got everything set up for UCLA and N.C. State to play at Petco Park on Tuesday. It was set to be 55 degrees with only a few clouds in the sky at kickoff and it would have been a great spectacle.

Last chance to get suite and premium seating at https://t.co/RBFp1FLtAR pic.twitter.com/Ne1Utpp0f5

However, due to COVID-19 issues within the Bruins’ program, it will not be played this year. The game was cancelled just hours before kickoff.

Put it on the Monster so we know it's real. 😍 pic.twitter.com/YeRjWxar3f

The lines were painted on the field and the logo was on the 50-yard-line.

Both end zones even had their respective school colors simply painted just beyond the goal line.

It was going to be a beautiful, unique setting for what would have been a great game between two high-powered offenses.

However, due to COVID-19 issues within the Cavaliers’ program, it was cancelled three days prior to kickoff.

On Tuesday night, the Guaranteed Rate Bowl was played without issue.

West Virginia and Minnesota played under the lights at Chase Field, another great looking MLB stadium.

Prior to the game, the bowl decided to momentarily open the retractable roof shortly after warmups. A parachuter flew in before kickoff and fireworks went off during the anthem.

Thank you to the Frog-X Parachute Team for dropping in to @ChaseField! pic.twitter.com/FLO6t9bBzx

However, a brief rain storm rolled through and caused it to rain on a temporary grass field.

Lol they opened the roof at chase field and it’s pouring rain pic.twitter.com/9eVUMn3h7V

The play suffered in part because of the roof decision and only 21 points were scored in a sloppy first half.

That leaves one game left, the Pinstripe Bowl.

As of Tuesday afternoon, the game scheduled to be played between Maryland and Virginia Tech on Wednesday is still on. Although it is the least unique of the three games, having been played since 2010, it is still a very cool setting to play football.

The Terrapins swung by the stadium over the weekend and got to get a peek at what the field looks like under the lights. It’s gorgeous.

The Hokies swung by ahead of the game on Tuesday and got to take it all in. They were impressed.

As of this writing, the Pinstripe Bowl is scheduled to be played at 2:15pm ET on Wednesday, Dec. 29. Maybe next year, all four games will be played as planned in their respective, picturesque baseball stadiums.