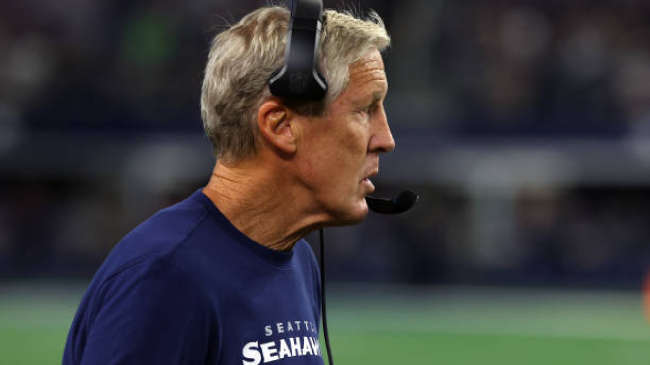 Pete Carroll has to be getting tired of talking about quarterbacks.

At the end of last season, he found himself answering questions about Russell Wilson’s future with the team. Those questions extended into the offseason right until the Seahawks traded Wilson to the Broncos.

Then the questions shifted to what the team’s quarterback situation would look like for the following season. Would Drew Lock be the starter or would it be Geno Smith?

We now know that the answer to that question is Geno Smith, but that didn’t stop Carroll from having another QB question to answer.

Pete Carroll, when asked how he'd build a perfect QB: “There's never been a more perfect guy than Carson Palmer. I mean, he was perfect. He was big, he was strong, he was fast, he was a great athlete, he was a great competitor.”

File that away for later. Maybe, like, next April.

Palmer had a very successful NFL career, passing for 46,247 yards and 294 touchdowns over the course of his career, good for 12th all-time in both categories. He also finished tied for 2nd in the NFL MVP voting in 2015.

Carroll probably finds himself wishing he had Palmer on his roster right now, maybe even the current, 42-year old version, as neither of the big, strong, athletic quarterbacks that are available to the Seahawks have ever looked anywhere close to perfect in their careers.

At least Carroll should have a wide range of quarterbacks to choose from with an early first round pick next season as he tries to find the next perfect quarterback.