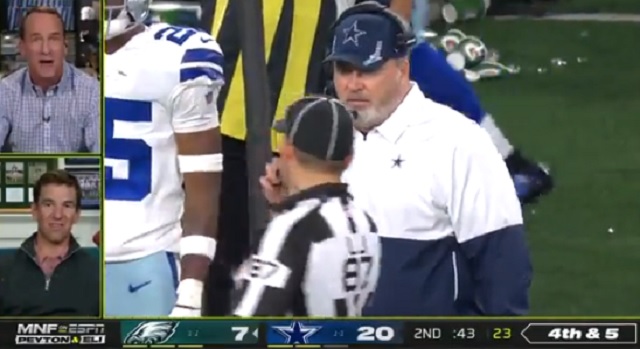 Peyton Manning is one of the smartest players to have ever played the game and he gets visibly angry when he sees teams making simple mistakes while he’s calling games on Monday Night Football.

Before halftime of the Cowboys-Eagles game on Monday Night, Cowboys head coach Mike McCarthy had the chance to stop the clock with two timeouts late in the second quarter which would have given the team plenty of time to drive down the field to score.

Unfortunately for Cowboys fans, McCarthy decided not to call any timeouts before the half.

instead he takes his 2 timeouts to the locker room and kneels on the ball pic.twitter.com/sJnUlfpYVk

While calling the game, a visibly disgusted Peyton was seen yelling at McCarthy to call a timeout.

Fans also went on to blast McCarthy over his terrible clock management skills.

Mike McCarthy has an NFL head coaching job managing the clock like this. Unbelievable!!