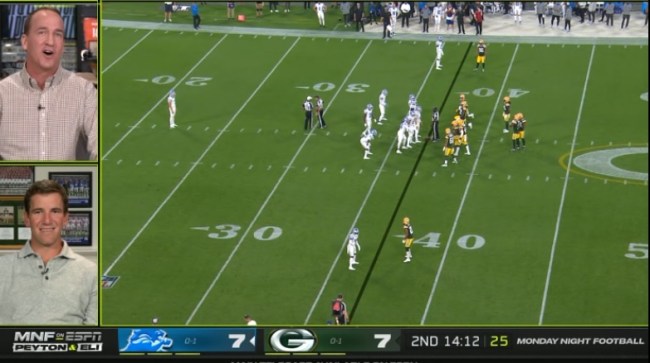 Peyton Manning is holding nothing back while hosting the alternative feed of Monday Night Football.

During the latest MNF megacast, Manning took a shot at the New England Patriots over their Spygate scandal. While talking about how the Packers must have listened in to his conversation with Eli about running the ball, Peyton blurted out “I think our conversation was bugged like the Patriots used to do back in the day.”

Peyton “I think our conversation was bugged like the Patriots used to do back in the day” pic.twitter.com/cBqrZ0uGHh

Peyton went on to joke about how he would hold meetings in the shower with his teammates in Indianapolis to avoid the Patriots’ bugs in the stadium.

“Every time I used to play against New England I would go and talk to my receivers like in the shower, in the far corner. I was like don’t talk about a play next to my locker because I know it’s bugged.”

This is why Peyton is must-see TV on Monday night.