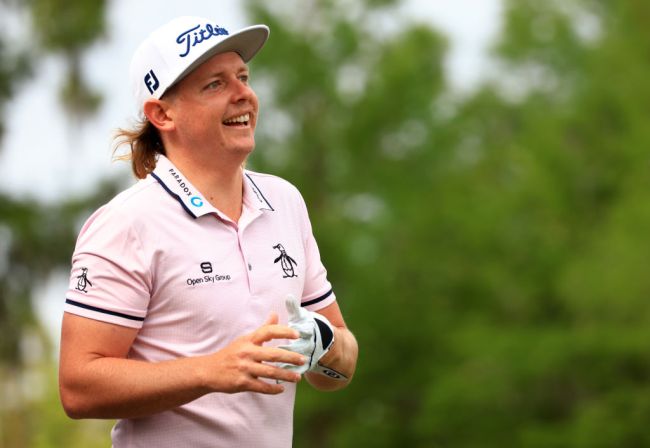 Cameron Smith has the best hair on the PGA Tour and it’s not even close. The 27-year-old Australian golfer, who tied for second at the November Masters and became the first player to post all four rounds in the 60s, had been growing out his mane for quite some time. However, it wasn’t until the Sony Open at the start of the year that he debuted a mullet so glorious that it rivals — if not surpasses — Billy Ray Cyrus.

Smith had seen a few of his countrymen sport the look on the rugby field during quarantine and thought he would do the same on the course.

"I'd really like to go full business at the front and party at the back." pic.twitter.com/wZXSBqpK7o

Since then the lettuce has evolved. And by evolved, Smith describes it as “filthier.”

Australian golfer Cameron Smith's mullet is the gift that keeps on giving 🥬 pic.twitter.com/YzbCy1YM5x

As this past weekend’s Zurich Classic in New Orleans rolled around, it was time to get it cleaned up. Now almost four months after its first appearance on the Tour, it’s become even more alluring.

Smith partnered with fellow Aussie Marc Leishman for the two-man team event in the Big Easy and they embraced the haircut to the fullest extent. Their walk-up song for the first tee each day was “The Mullet Song.”

With their song selection leading the way, the two went on an absolute tear to finish tied for first through 72 holes. The event went to a nervy alternate-shot playoff against South African duo Louis Oosthuizen and Charl Schwartzel, ultimately finishing in favor of Team Mullet from the Land Down Under.

The Aussies were dialed in the bayou. 🇦🇺

The best of the week from the @Zurich_Classic champs. 🏆 pic.twitter.com/C68ob81pmE

The win was Smith’s second at the Zurich Classic but it came with an interesting caveat that has forced him to break a promise to his girlfriend. If he were to win a PGA Tour event, he said he would cut the luscious locks. But before the weekend even began, he was already hesitant to commit to a buzz.

The Cam Smith mullet is here to stay. pic.twitter.com/Rf1fPgbPom

Well, that victory came with a 7-foot par putt on Sunday. When prompted about his deal in the post-match interview, Smith said that the mullet is here to stay.

REPORTER: “Before the tournament started, Cameron, you said that you had a deal with your girlfriend that when you won you would cut the mullet. What’s the status of the mullet?”

CAM SMITH: “I would have to apologize to my girlfriend, it’s not going away. I mean, it’s, I feel like it’s part of me now.”

MARC LEISHMAN: “He’s got a cult following now. You should hear the fans out there. They’re all over it. It’s awesome.”

CAM SMITH: “Yeah, it’s really cool. It gives the fans something to get behind. Lots of people love it and it’s good fun as well. It makes people laugh. I love it.”

Although Smith’s hair may not be going anywhere, his girlfriend Jordan Ontiveros probably won’t mind him coming home with a mullet and a check for $500,000. Seems like a fair trade off.