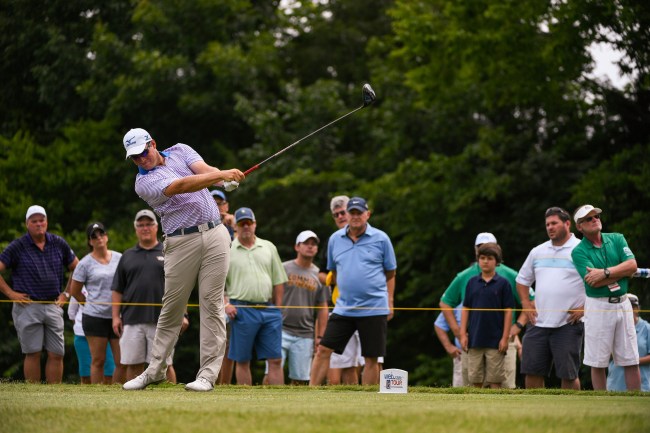 It was the final round of the 2016 News Sentinel Open when Adam Schenk got his first real taste of golf fame on a national level. Although Schenk shot a final round 65 to finish the tournament in 6th place, it was his pairing that made golf headlines. You see, the stars aligned just one day earlier and somehow, some way, Adam Schenk, Ryan Yip and Jhared Hack were all paired together in the final round. The pairing was a moment of total randomness. It was also a moment that Schenk says is still “the most publicity he has ever gotten.”

Since that day in 2016, Schenk has gone on reach the PGA Tour and he is currently almost through his first full season. Adam Schenk may not be a household name yet, but his success shouldn’t be a surprise to anyone who has followed his short professional career.  His career started in 2015 on the PGA Tour Latin America, and his results have steadily improved year-over-year. It is a trend we expect to continue now that he has arrived at the next level.

BB: Now that you have 20 PGA tour events under your belt, what is the biggest difference, in your opinion, that you have noticed between playing the PGA Tour and the Web Tour? Is it course set up? Elevated competition?

Adam Schenk: It’s still a little bit of everything that you said. The course setup is much harder. You play on the Latin American and they play probably two or three courses that were very, very challenging. And then on the Web it’s kind of similar. You play the playoff events which were more challenging, but during the regular season you probably played a couple that would really test you.

On the PGA tour, a lot of people ask what’s the best course you’ve played and I can just sit there and rattle off 10 before I know it, because they’re all very good and difficult. I think that’s been the biggest adjustment for me, understanding that yes, sometimes even is a great score. I played 20 events so it’s been an adjustment, but I’ve been really enjoying it and it’s nice. I’ve had a teammate out there with me, Tyler Duncan, so we eat a lot of meals together and play a lot of practice rounds. I haven’t met someone out there that I don’t like it. Everybody on tour has been very helpful to me and it’s been an enjoyable experience. I’ve been very fortunate.

BB: How has choosing your schedule changed? You had a very high finish to the Web tour season last year, does that finish allow you to play in whatever events you want, save for WGCs and majors?

AS: If I get into a tournament I’m definitely going to go play.  I’ve gotten into all of them except three or four. Minus the WGCs, I didn’t get into Waste Management or Hilton Head, but I have been fortunate where I did have a high finish on the Web and I got five starts in the fall and then after those five starts they reshuffle everybody again and I actually had my best finish which was the 20th. So I’m in decent standing in the reshuffle.

BB: You have seen success and improvement year-to-year at every level so far. From college to PGA Tour Latin America, to the Web Tour, what do you think you have to improve upon to maintain that forward momentum and build upon this rookie season?

AS: I’m working on tightening up my misses right now. Everyone is constantly tightening up their swings up, but I’d say my misses are little worse than most than most people’s. I’m actually at Purdue University and working with Rob Bradley and Coach K up here. So I’m just tightening up my swing and trying to eliminate my big miss because on the PGA tour they only give you a little bit of room to miss it.

BB: I would be remiss if I didn’t ask you about one of the hottest topics on golf Twitter over the last few weeks… which is backstopping. Have you seen what Jimmy Walker said? And do you think backstopping is actually an issue?

AS: It all depends on the situation. Unless a player hits quickly without letting me mark my ball, I would go mark my ball to protect the field. Now if it’s a straightforward chip shot — where they’re gonna more than likely leave it within a foot of the hole — I don’t think there is a dire need to go  and market then. But if it is some sort of a difficult chip shot, I would ask the other player to mark their ball. I just wouldn’t feel right if I knew that the only way I could stop it was hitting the pin or their ball.

Also, when you are thinking about their ball, you are not solely focused on exactly what you are doing. And then you’ve lost focus about trying to actually chip it close to the hole. I think I might have better chip shots by asking to mark it because then there is no other way that you can stop the ball besides hitting a good chip shot or hitting the pin. 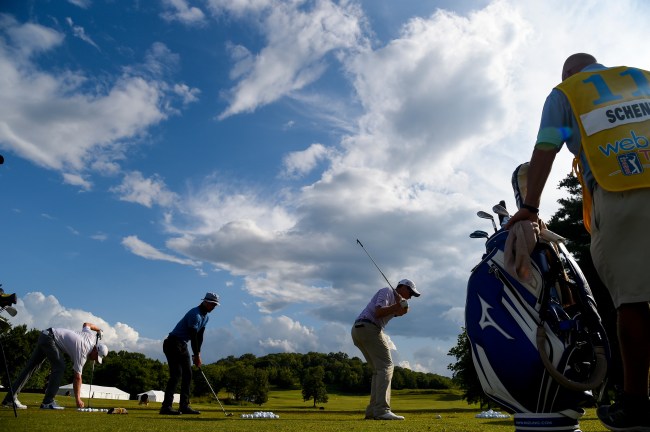 BB: Ok, now we are going to shift gears and I’m going to ask you a few random questions. Answer them with one word if you want. Here we go…  What’s the most lavish thing you have bought for yourself with your winnings?

BB: Do you have a nickname that people might not know?

AS: Everyone just calls me by my last name.

BB: Seems like the younger generation always goes with Tin Cup. Anyway…do you ever dream about golf? Do you have a golfing nightmare you can share with us?

AS: I occasionally have the dream where sponsors signs are always in my way making it impossible to tee off. And then the rules officials are telling you, “hey, you gotta hurry up” and I physically cannot hit the ball. The other one that I have is the “15 club” dream probably twice a month, maybe more.

BB: You grew up on a farm in Indiana, correct? How did you wind up getting into golf? Was it a family thing?

AS: Yeah, I grew up on a farm. My dad always played, grandpa always played and we had a sod farm. We had seven acres our in front of our house, so they cut me down a sand wedge and I would just go wack balls around there. I had all the room in the world.

BB: No wonder you picked “Tin Cup.” You had your own driving range.