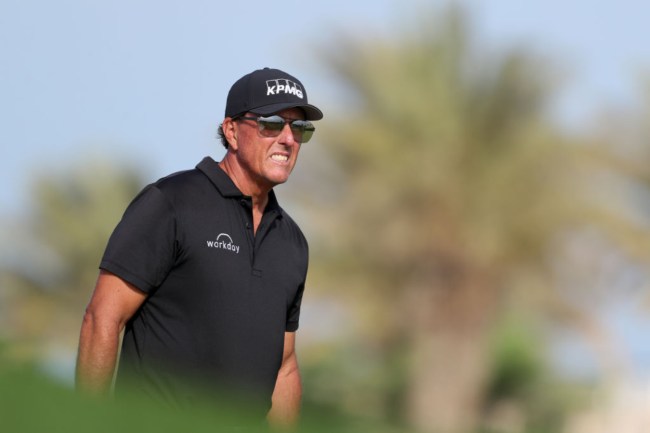 The walls seem to be falling around Phil Mickelson, and they’re falling fast.

It took all of five days for Mickelson to realize his comments about the PGA Tour and Saudi Golf League were ludicrous, and on Tuesday he issued a lengthy apology.

Alan Shipnuck of The Fire Pit Collective published parts of an interview he had with Mickelson for his upcoming book on the six-time major winner. Mickelson lit fire to the PGA Tour calling it a “dictatorship” while simultaneously calling the Saudis behind the new Saudi Golf League “scary motherf–kers” and murderers.

Mickelson’s comments quickly became the golf story of the young new year. Then the backlash came from fans, media, and PGA Tour players calling out Mickelson for his comments.

After a few days of reflection – or scrambling to put together a statement that checks the many boxes that need to be checked – Mickelson has issued an apology.

A Statement from Phil Mickelson pic.twitter.com/2saaXIxhpu

Mickelson claims that the comments Shipnuck shared in his story were “off record” and shared without his consent.

Off the record is something agreed upon by both the journalist and the subject. Shipnuck is regarded as one of the top golf journalists and authors on the planet, it’s tough to imagine him sharing “off the record” comments for clicks.

Shipnuck immediately took to Twitter to say the “off the record” part of Mickelson’s statement is “completely false.”

After reading the full statement, you can sense that Mickelson is trying his best to save face with his many sponsors as he mentions them a few different times.

It’s also worth noting that he mentions LIV Golf Investments by name, and even says his experience has been “very positive” with them despite calling the backers “scary motherf–kers.”

He doesn’t mention the PGA Tour by name once, but instead uses the statement of “golf desperately needs change.” It’s clear that Mickelson hasn’t exactly ended his relationship with the Saudi Golf League. It could be done with him, but he appears to be keeping that door open.

Mickelson also states that he needs time away from the game of golf. He last teed it up on Tour in late-January at the Farmers Insurance Open where he missed the cut.

Last line of Phil's apology—"desperately need some time away to prioritize the ones I love most and work on being the man I want to be"—makes it hard to think he'll play before Augusta.

Asked the PGA Tour if he might be suspended; they declined to comment on any of those rumors.

I’ve read this a few times and I’m still confused. Especially by the break part at the end. https://t.co/vQq63dcLKC

This isn’t an apology. This is an explanation.

Dude dug a hole and is now burying himself in it. https://t.co/m2JfazdYsD

Just read Phil’s statement, it’s 6 paragraphs, the 1st paragraph sets the stage for him being a victim, the 2nd paragraph is him pretending to be an activist, the 3rd/4th paragraphs are about spin and damage control/money and the 5th and 6th are him saying he’s a good guy.

Definitely not strange at all Phil mentions LIV Golf Investments by name, but zero mention of the PGA Tour.

Blaming the Shipnuck for reporting what he said…

still all in on the Saudi plan…

and trying to take some down time from his sponsors and golf so he hopes this blows over and he doesn’t lose both? https://t.co/gBdDYkwoNI

Wait… Who is this apology to? https://t.co/qRAtQS2SGs