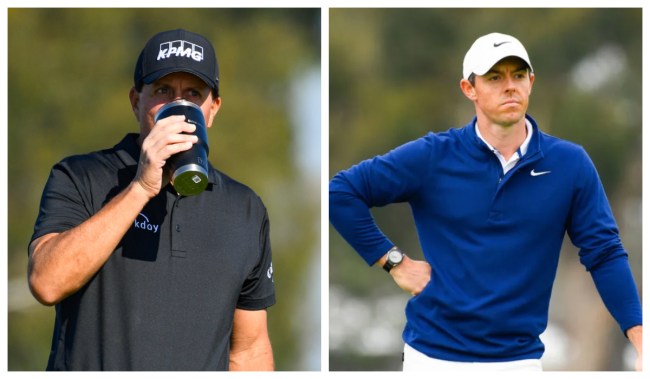 Rory McIlroy has been extremely outspoken against the idea of a Saudi-backed golf circuit that would rival the PGA Tour. He firmly planted his flag on the PGA Tour’s side even before the wheels for the breakaway tour were in motion.

With that being said, his harsh comments about Phil Mickelson calling the Tour a “dictatorship” should come as no surprise.

Mickelson also described the Saudis as murderers and “scary motherf–kers” while essentially saying he’s still considering working with and for them in order to change the PGA Tour.

While the Genesis Invitational, hosted by Tiger Woods no less, took place this past week, talk of the Saudi Golf League dominated the headlines. After Mickelson, who wasn’t in the field this week at Genesis, threw gasoline on the flame, golfers were asked to share their opinions.

Both Dustin Johnson and Bryson DeChambeau released statements pledging their loyalty to the PGA Tour, but McIlroy’s message about the SGL and Mickelson’s comments was by far the boldest.

“It’s dead in the water in my opinion. I just can’t see any reason why anyone would go,” McIlroy said following his final round at the Genesis.

“I don’t want to kick someone while he’s down obviously, but I thought they were naive, selfish, egotistical, ignorant,” McIlroy said about Mickelson’s comments.

“It was just very surprising and disappointing, sad. I’m sure he’s sitting at home sort of rethinking his position and where he goes from here.”

McIlroy is always honest and candid with the media, it’s one of the many reasons he has so many supporters, and he certainly told the world how he really felt about Mickelson and the SGL.

The majority of golf fans on Twitter praised McIlroy for his comments about Mickelson:

Have always liked Rory McIlroy and have often been awestruck by his candor. Never more than now. https://t.co/UjzgtU2a7m

This is why Rory is one of my favorite athletes. He isn’t afraid to be completely honest. https://t.co/TxHzJXfl8L

One of the most devastating uses of “but” in history https://t.co/xvqy3OPEwR