Phil Mickelson Has The Golf World Talking With His Disheveled Look, Choice Of Attire At The First LIV Event 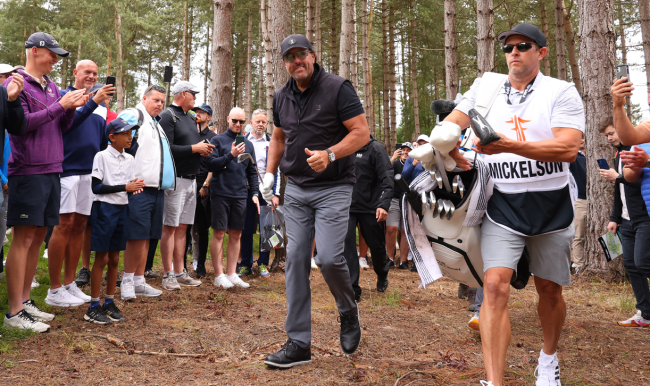 Phil Mickelson is one of the biggest names to have left the PGA Tour for the riches of LIV Golf. He, along with Dustin Johnson, Sergio Garcia, Kevin Na, Bryson DeChambeau, Ian Poulter, Lee Westwood and Patrick Reed, shocked the world of golf with their defection to the new Saudi-backed golf organization.

On Thursday, the first event on the eight tournament LIV Golf schedule teed off at The Centurion Club in St Albans, England.

Mickelson’s appearance, including the fact it looks like he hasn’t shaved in a few days, was especially notable due to the fact that he began the day wearing an top with a blacked out logo of Augusta National on it.

There is one more logo on Phil Mickelson today — that of Augusta National. pic.twitter.com/I94hTXu71k

Why is Phil Mickelson sporting a Augusta National logo during the first LIV Golf event?

Is he merely trolling the PGA following the tour’s harsh punishment for defecting?

The PGA Tour announced that all players who joined LIV Golf are “suspended or otherwise no longer eligible to participate in PGA Tour tournament play, including the Presidents Cup.” This suspension also applies to the Korn Ferry Tour, PGA Tour Champions, PGA Tour Canada and PGA Tour Latinoamérica. It also means they will not be allowed to compete in a PGA Tour event under a sponsor exemption as well.

Or, perhaps, is Mickelson, who has not played on the PGA Tour since missing a cut in February, just showing some love to the prestigious tournament that he won three times, in 2004, 2006 and 2010?

That’s just one of the many questions golf fans have as LIV Golf holds its first tournament.

“Phil is daring Augusta to ban him from the Masters right?” one person on Twitter asked.

“He’s like Hulk Hogan during his NWO days,” another golf fan joked.

“Phil looks like that dude at the end of the bar that ‘has seen some ish.’ You know you wanna hear the stories, but legit afraid he’s gonna say something you can’t unhear,” someone else observed.

What’s with all the black he’s wearing now? He’s gone to the dark side pic.twitter.com/ojYK40jedW

Phil looks like a hungover insurance salesman at the company tourney on day 2.

I am guessing Phil's razor sponsor also dropped him

UPDATE: Could this be the reason for Mickelson’s unexpected choice of attire?

It appears that Phil changed black vests which insinuates that he *wanted* the ANGC logo visible when he hit the first tee shot in a rebel league he apparently helped create. Which I have to say, in a week full of weird activity, is quite possibly the weirdest. pic.twitter.com/xwfKVBLTy2