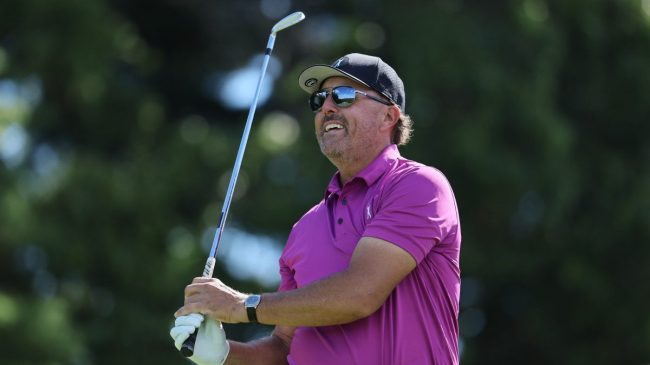 Perhaps no golfer has been a more central figure to the LIV Golf-PGA Tour feud than Phil Mickelson. The six-time major champion was the first major name to defect for LIV and has been vocal in his criticisms of the PGA Tour.

Because of this, Mickelson has also been the subject of the most criticism. Fans have even went so far as to heckle Mickelson at LIV events, leading to some truly horrendous golf shots.

But the 52-year-old says he remains unbothered. In fact, Mickelson claims he’s moved on from it all.

Mickelson recently sat down with Sports Illustrated’s Bob Harig to discuss a number of topics. But chief among them was his move to LIV and seemingly ongoing feud with the PGA Tour.

One answer in particular stood out and caught the eye of a number of golf fans.

Do you feel you’re at the point where you can move on?

PM: “I said earlier that I was moving on but I probably should have added that I’m incredibly grateful for the PGA Tour. The 30 years I spent on the Tour. The opportunities it provided me, (my wife) Amy, my family. Very appreciative of the PGA Tour. I have moved on. I’m going in a different direction and really trying to help take LIV Golf to where I think it go. What it provides is an opportunity to take world-class golf globally.

Mickelson answer was strange for a number of reasons, the largest of which being that he’s currently leading an antitrust lawsuit against the PGA Tour.

Mickelson joined Ian Poulter, Bryson Dechambeau and eight other LIV golfers in a suit that seeks to allow those players to continue to play on the PGA Tour while playing for LIV.

“The Tour’s conduct serves no purpose other than to cause harm to players and foreclose the entry of the first meaningful competitive threat the Tour has faced in decades,” the complaint reads.

Phil Mickelson sure seems to have a weird definition of “moved on.”