Eagles Fan Passes Out Yelling While Watching Game, Wakes Up In Hospital To Delightful Surprise 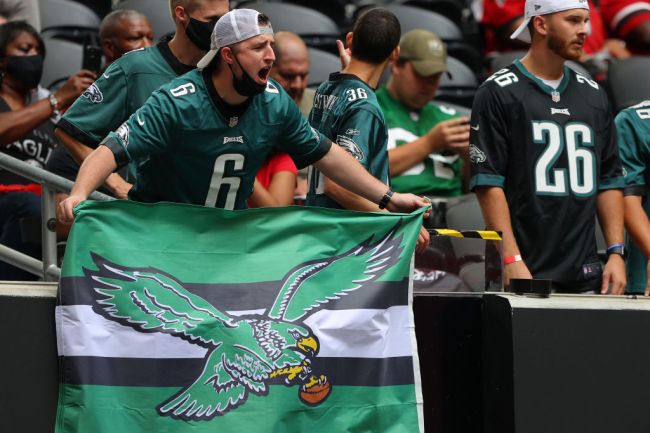 Philadelphia Eagles fans are some of the most passionate in all of sports. Their passion really shows itself when the Eagles are bad, so the team’s 1-3 start to the season has Philly fans already feeling some type of way. This story about one die-hard fan is a perfect example of that.

The Eagles stopped their three-game skid with an impressive road win against the Panthers on Sunday, but a fan known as ‘Lunatic Jack’ didn’t get to see the W. Why didn’t he get to see the win, you ask? Because he was yelling so much at his TV he passed out and was taken to the hospital.

The fan shared the alleged story during a call to WIP’s ‘Angelo Cataldi and the Morning Team‘ show. He claimed that he was actually making the call from his hospital bed in Philadelphia and explained that Nick Siranni’s play-calling was so bad he passed out and woke up in the hospital after the game was over. It wasn’t until after he woke up that he was informed that the Eagles actually won the game.

Cataldi was so shaken by the caller that he had to slow down and go into detail.

“You’re watching the game, they don’t run on that play, they get the sack, you lose your mind, and you go insane. You have a heart episode, the ambulance comes and rushes you to the hospital, and you’re in the cardiac wing, don’t even know the Eagles have won the game. Is that the story,” Cataldi asked.

The caller’s response was incredible.

We have no way of truly knowing if the caller is completely making this story up or if it’s legitimate, but just for the sake of how legendary the tale is, let’s give him the benefit of the doubt.

Plus, let’s be honest, an Eagles fan passing out from yelling at his TV about the birds and waking up in the hospital later is extremely on-brand for a Philly sports fan.