Based on the horror stories that have come out of Philadelphia over the years concerning the less than ideal behavior of sports fans who root for the teams that call it home, it would appear the “City of Brotherly Love” is one hell of a misnomer when it comes to describing the antics of supporters known for booing their own players, chucking batteries at visitors, and pelting Santa Claus with snowballs at an Eagles game.

Earlier this week, we learned one of the reasons Ben Simmons is pushing for a trade is his crippling fear of playing in front of the 76ers fans who have not been shy when it comes to voicing their displeasure with an NBA player who’s apparently equally terrified of shooting a jumper. This makes him just the latest in a long line of athletes who couldn’t handle the pressure that comes with playing in Philly, but there are also plenty of others who’ve used it as motivation.

That includes Philadelphia Eagles running back Miles Sanders, who was drafted by the team following his time and Penn State and proceeded to break the franchise record for most rushing yards in a rookie season (which was previously set by LeSean McCoy).

Sanders recently spent a day with Whistle for a tour of his favorite spots in the city, which included a visit to his go-to Philly cheesesteak joint: Jim’s. While there, he shared how he feeds off Eagles fans for motivation on the field, saying:

“Growing up in Pittsburgh, we’re real big on sports, and Philly is very similar—especially with football. They love their football. I like the fans because they keep me at a high level. If I play a bad game, they’re going to hate me on social media.”

During his visit to Jim’s, he also revealed the very unconventional cheesesteak order that will undoubtedly cause some Philly cheesesteak purists to hop into his mentions, as the admittedly “picky” player says he prefers to throw ketchup and mayo inside his hoagie. 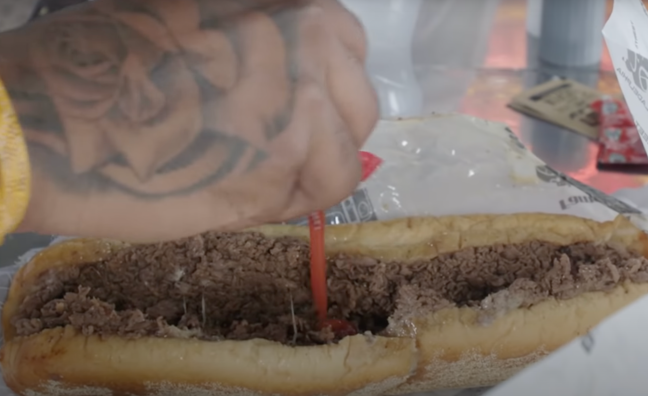