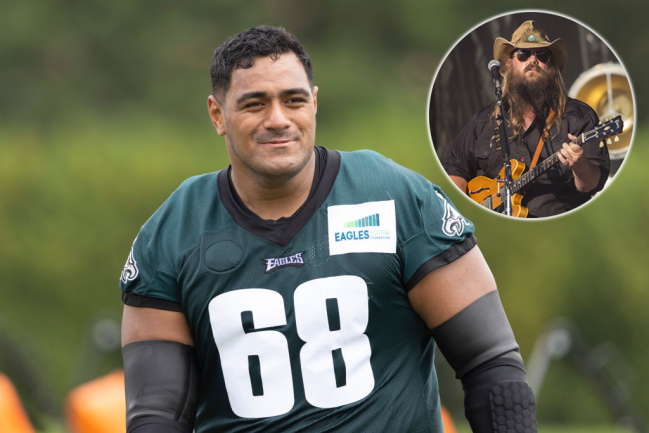 Philadelphia offensive lineman Jordan Mailata has all but locked up the left tackle spot for the Eagles. The 24-year-old Australia-native is impressive, but it is not only his football skills that have turned heads— he has serious pipes.

Mailata recently performed Chris Stapleton’s ‘Tennessee Whiskey’ during a team meeting and absolutely crushed it. It’s hard to bring justice to a song that is sung by such an incredible vocalist. Mailata did an awesome job and his teammates were impressed.

One of the Eagles players can even be heard saying “I wouldn’t be here,” in reference to what he would be doing if he had Mailata’s talent.

Everyone needs to stop what you’re doing and listen to 6’8” 350 lb Jordan Mailata sing Tennessee Whiskey at the Eagles team meeting tonight. Kid has PIPES #FlyEaglesFly

The most talented man in the NFL?

As the 223rd overall pick in the 2018 NFL Draft, Mailata has not had a typical path to the league. The 6-foot-8, 345-pound behemoth initially pursued a professional career in rugby and produced a legendary highlight reel.

He ate dudes for lunch.

After quite literally growing out of his position, Mailata joined the NFL’s International Player Pathway Program and tried on football pads for the first time in 2017.

By August of 2018, just a few months after being drafted, he was on the gridiron at training camp with the Eagles. He wasn’t very good at first and he sat out all of the 2018 and 2019 regular seasons but it was a project that has paid off.

Mailata was thrust into action in 2020. With a massive wingspan and a wide, sturdy base, Mailata not only passed the eye test but he put in enough good tape to take over the starting spot.

Now, ahead of 2021, he is the effective incumbent at the left tackle position and slated to lock down Jalen Hurts’ blindside. If he doesn’t get a record deal first, that is.

The big fella can really sing!