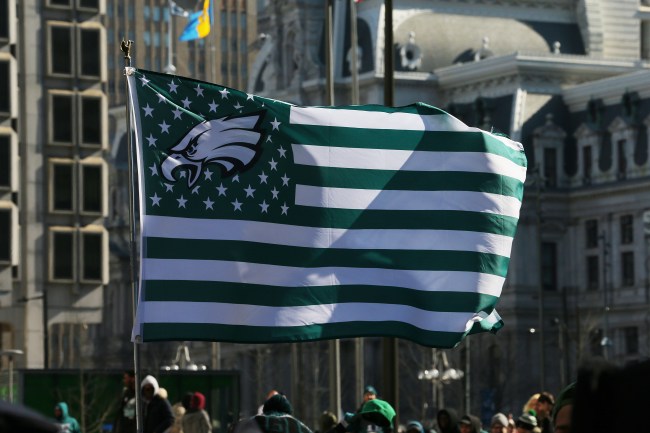 The Philadelphia Eagles have finally unveiled their 2018 Super Bowl Ring. The ring is being dubbed the ‘Philly Special’ as the 127 diamonds found on the bezel are meant to pay tribute to the three players who handled the ball post-snap, 127 is the sum of their three jersey numbers (Corey Clement #30, Trey Burton #88, and Nick Foles #9). There are 219 total diamonds on the ring and 17 green sapphires to add that stylish Philly green.

The Philly Special ring wouldn’t be complete without some nod to the ‘underdog’ mentality and you just knew that the Eagles were going to incorporate it somehow, which they did. You can find the underdog mask inscribed on the inside of the ring.

The Eagles’ Super Bowl ring is made from pure 10-karat white gold. And in addition to featuring the 219 total diamonds and 17 green sapphires the Philly Special ring also has the quote “We All We Got, We All We Need” across the side, split between the Super Bowl trophy. Below the trophy is the word ‘Family’.

A first look at the Eagles Super Bowl ring. There is a waterfall of 127 diamonds paying tribute to the "Philly Special" — 127 represents the sum of the jersey numbers of the three players who handled the ball post-snap. (Photo… https://t.co/QTa8JyTXWz pic.twitter.com/wBVKPt5Uvz

According to ESPN’s Tim McManus, after the Philadelphia Eagles won the Super Bowl they team met and discussed what direction they should go with their Super Bowl ring. It was initially suggested that they ‘should go the elegant route’ but the players quickly objected and said the ‘The bigger and the bling-ier, the better’ and that’s how the Philly Special ring was born.

The rings were debuted at a team ceremony last night during a private team event held at 2300 Arena in South Philly. Former players and coaches were in attendance as was all of the players who won the 2018 Super Bowl.