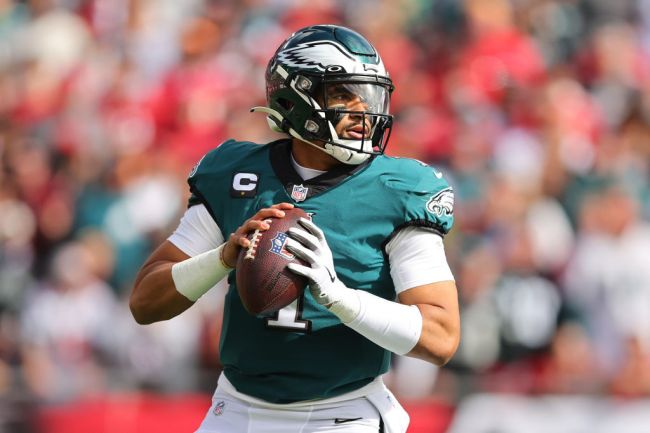 The Philadelphia Eagles have tried to convince the world that they are absolutely sold on the idea that Jalen Hurts is their franchise quarterback. They have said it over and over again in interviews.

The only problem is that their actions haven’t really matched their words. There had been reports during the offseason that the Eagles were pursuing trades for a couple of the top QBs that were made available. The team’s owner recently came out and said that he regrets not drafting Russell Wilson, presumably because he wishes Wilson was his current QB.

Now, they have planned a visit with one of the top quarterback prospects in this year’s NFL Draft. Matt Corral told Rich Eisen yesterday that he’ll be meeting with the Eagles.

Meeting with top draft prospects at quarterback isn’t exactly something you usually see from a team that is sold on their current starting quarterback. You would think that they would want to avoid things like this after crushing the confidence of their last QB.

It’s also odd timing after the Eagles just made a move to shift some of their draft capital to next season. That move seemed like it was designed to let Hurts start for another year before they potentially pursued a QB in a better draft class.

Drafting Corral would put an end to that. If they were to actually draft Corral, that would make Hurts a bridge quarterback for the year while Corral recovers from his injury and acclimates to the NFL.

The Eagles might not actually end up drafting a QB this season, but it doesn’t seem like they’re necessarily convinced the one they have right now is actually their answer at the position.