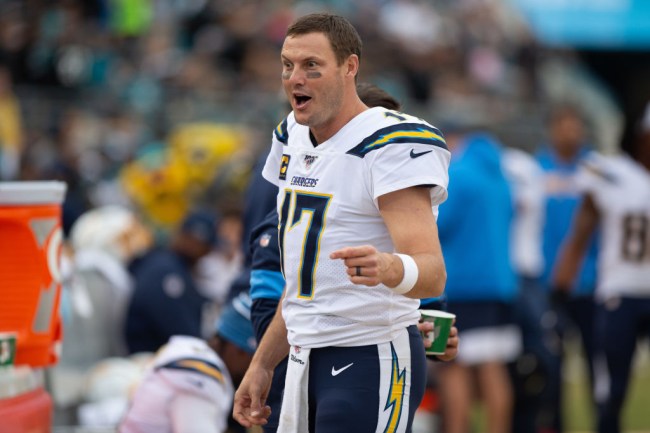 It’s always, 100 percent of the time entertaining when we get to hear mic’d up professional athletes during a game. Sure, it’s cool when we hear them talk about the game at-hand and strategy, but the real entertaining stuff is when they just talk mad shit to each other.

Philip Rivers, a father of eight, delivered in the shit talking department against the Jaguars on Sunday.

Rivers connected with Austin Ekeler for an 84-yard touchdown in Jacksonville. He ended up on his rear end and even though Jags lineman Yannick Ngakoue extended a hand and helped him off the ground, it didn’t keep Rivers from giving him a literal earful.

This is the greatest mic’d up moment in NFL history 😂 pic.twitter.com/yvPUYUVPOg

NFL Memes isn’t wrong, this is at the very least one of the best moments in mic’d up NFL players history.

Ngakoue was so friendly in helping Rivers up, then all of a sudden he had this crazy-ass screaming going into his earhole letting him know his team just gave up a 90-yard touchdown. It was so wild even the official told Rivers to ‘get the fuck out of here.’

The Jags lineman simply asked Rivers not to yell in his ear and Rivers replies back with ‘I will do it by your ear, that’s what I do.’ Since when did Rivers turn into such a villain like this? Also, shoutout to Ngakoue for not even calling Rivers by his name and just calling him by his number.

I guess Rivers does have to talk shit any chance he gets because after all, he’s thrown 15 interceptions this year compared to just 20 touchdowns. Hats off to him though for not throwing a single pick against the Jaguars which marked just the fifth time this season he went a full game without an interception.