Philip Rivers, Who Is Set To Be A Free-Agent After The Season, Would Reportedly ‘Love’ To Play For Titans 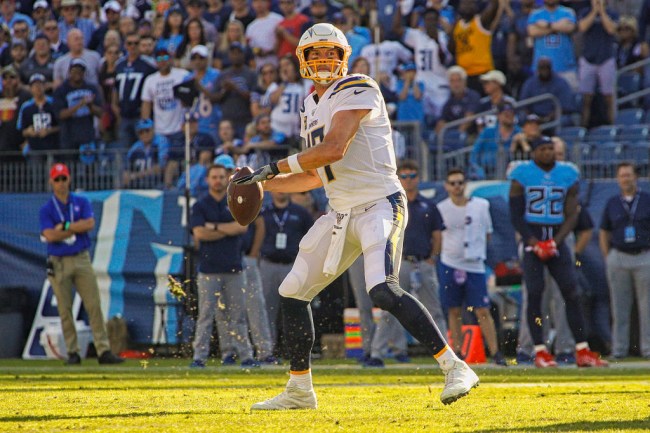 Philip Rivers is set to become a free agent at the end of the season and all signs point to his 16-year stretch with the Chargers coming to an end.

Rivers has had a rough go of it this season with just 15 touchdowns compared to a whopping 14 interceptions to go along with a completion percentage of just 64.4%.

It certainly feels like it’s time for both Rivers and the Chargers to simply move on.

With that comes the question as to where the soon to be 38-year-old quarterback may land next season. According to Matt Miller of Bleacher Report, there’s a rumor going around that Rivers would ‘love’ to play for the Titans.

A rumor "making its way through league circles" is that Philip Rivers, who will be a free agent this summer, would “love” to play for the Titans, per @nfldraftscout pic.twitter.com/eNBZm7h7fL

If we’re speaking about things we’d love, I for one would love for my upstairs neighbor to stop letting her kids run sprints up and down the hallway, but that may not happen.

Tennessee, on paper at least, could make sense for Rivers given the fallout between Marcus Mariota and the franchise as he too will be a free agent at the end of the season. The Chargers and Titans are similar in the sense that they both could very well let their once franchise quarterbacks walk.

With all of that being said, who’s to say the Titans or any other team around the NFL will be looking to sign Rivers? He looks like a beaten player at this point, his numbers are atrocious and the traditional pocket passer is fading fast all around the league.

It will be interesting to see where Rivers lands next year. There were will be plenty of turnover in various team’s quarterback rooms, but we’ll have to wait and see which team gives Rivers a shot in a new city.