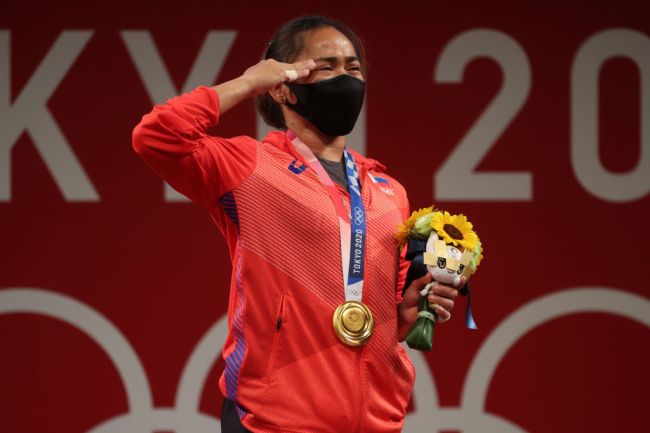 Weightlifter Hidilyn Diaz won the Philippines’ first-ever gold medal at the Tokyo Olympics and ended a 97-year drought. Upon her return home, she will be greeted with some substantial rewards.

Diaz, 30, took down second-place finisher (and gold medal favorite) Liao Qiuyun of China to earn the top spot in women’s 55-kilogram weightlifting. She won with a total of 224 kilograms, which was an Olympic record and just one pound more than Liao.

Her epic win came as a walk-off upset. Diaz was tied with Liao going into the clean and jerk.

She had just one lift left to get 127 kilograms after her first two attempts and nailed it. After she lifted the bar over her head and heard the buzzer, Diaz was overcome with emotion..

She had made history.

The Philippines won its first medal with a bronze in 1928 and has been in every modern Summer Olympics except one since 1924. Diaz’s win on Monday marked the first time that the country’s national anthem was played during the medal ceremony.

Hidilyn Diaz is set for life.

To celebrate her victory, Philippine officials and companies have pledged nearly $600,000 in cash for Diaz. That number is pretty significant in perspective.

The Philippines has a generally low cost of living and $600k will go an extremely long way. Most reports say that you can live comfortably on $1,200 a month in Manila. That includes housing, utilities, food, healthcare and taxes.

Going off of that number, essentially, the country is setting her up for life and deservedly so. In addition, a local real estate company in the Philippines vowed to give her a condominium in an upscale district of the country’s capital city Manila.

“I think this victory is also a game-changer for Philippine sports,” Philippine presidential spokesman Harry Roque said Tuesday. “This is a reason maybe for our policymakers to really appropriate a bigger support to our athletes.”

Diaz’s win was monumental for the country with a population around 1.2 million and she deserves all of the recognition.