Phillie Phanatic Dressed Up Like Frank Sinatra And Smashed A Yankees Helmet, Giancarlo Stanton Was Not Impressed 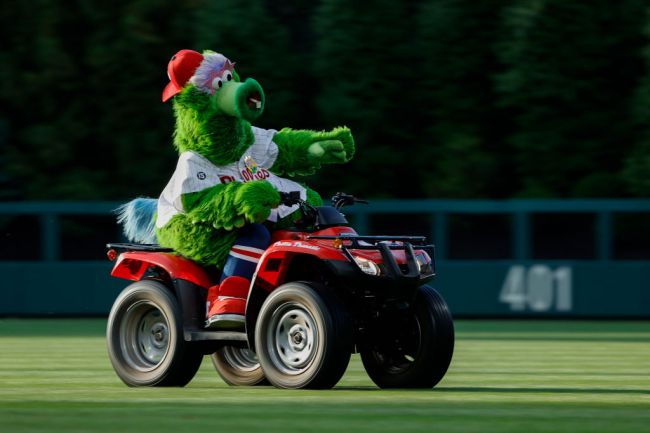 The Phillie Phanatic is the weirdest mascot in sports. Well, until his hockey cousin Gritty came along. In fact, the Phanatic was recently voted the most obnoxious mascot in the MLB. And it’s well deserved.

The large, fluffy, green monster is known to mess with opposing teams, dance with umpires, heckle his opponents and mock their swings. It is equal parts hilarious, equal parts annoying as can be.

As the Phillies faced the Yankees on Saturday, the Phanatic added to his reputation. Naturally, the two teams are not big fans of one another and that was made abundantly clear during the first of two games at Citizens Bank Park this weekend. After the fifth inning, the Phillie Phanatic walked onto the field wearing a tuxedo, strutting jauntily. The Phanatic’s intentionally striking resemblance to Frank Sinatra came full circle as ‘New York, New York’ payed over the speakers.

The song is notorious for the Yankees.

After riling up the home crowd, the Phanatic danced over to a Yankees helmet and destroyed it. The helmet stood no chance.

Giancarlo Stanton wanted none of it 😅pic.twitter.com/jodSOPeyZ4

As the Phanatic went about its antics, Yankees slugger Giancarlo Stanton was not impressed. The Phillies went on to win 8-7.