Phillip Lindsay’s Injury Means He’ll Have To Pay His Own Way To The Pro Bowl Now (Which Is Some B.S.) 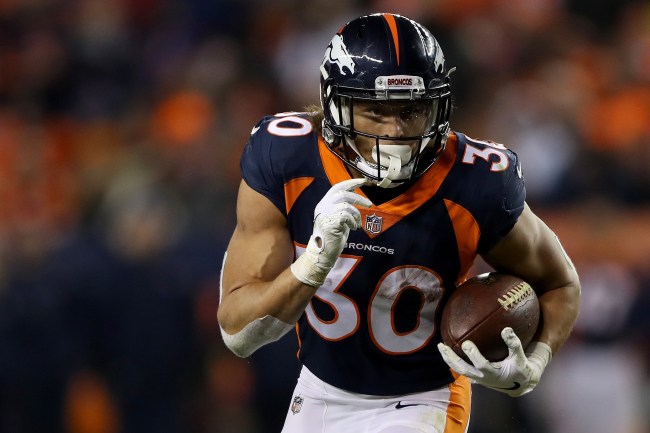 Phillip Lindsay of the Denver Broncos is having a (unexpectedly) superb rookie season, showing that he’s got the chops to be a dangerous player for years to come. After being scooped up as an undrafted free agent over the summer by Denver out of the University of Colorado, the pint-sized runner has gained over 1,000 yards rushing and has scored 10 total touchdowns, which helped him earn a Pro Bowl spot.

Unfortunately, Lindsay sustained a significant right wrist injury during his team’s Monday Night Football game earlier this week against the Oakland Raiders, which will prohibit him from playing in the All-Star Game. While that sucks, it gets worse for Phillip Lindsay; because, according to NBC 9 in Denver, per Pro Football Talk, even if the running back wants to attend the game, he’ll have to pay his own way since he’s not part of the Broncos’ active roster.

Because he’s injured, Lindsay isn’t eligible for compensation. The NFL pays travel expenses only for full participants, who also make $70,000 for being on the winning team or $35,000 on the losing team.

The Broncos are prohibited from paying Lindsay’s way under salary cap rules.

So, yeah, just because he’s been one of the best running backs in the NFL this season, Phillip Lindsay would have to pay like any other schmuck, which totally sucks for a guy who’s making just $495,000 this year, per Spotrac. Given the fact Phillip Lindsay’s still living at his parents’ house to help him save money — as I reported a couple months ago — I’ve got a feeling that he’ll be ditching out on the Pro Bowl.

However, because the Internet is F’in awesome, of course a Denver Broncos fan has already started a GoFundMe to help pay Lindsay’s way to Orlando for the Pro Bowl, which is a pretty cool gesture that I hope pays off (pun intended). Plus, the description for the crowdsourcing campaign makes quite the convincing argument for Phillip Lindsay.

Phillip Lindsay is the first undrafted offensive rookie to be named to the Pro Bowl. He has brought all of us as Broncos fans so much joy and excitement in an otherwise miserable season full of frustrating coaching and brutal injuries… An undersized, overlooked back who grew up locally, stayed locally at Boulder, and now is on the Broncos, he has been an inspiration to so many.  He was originally our 6th rb on the depth chart but fought his was all the way to the top and produced only the third 1,000 yard rushing season by an undrafted rookie in NFL history… Unfortunately, in week 16 against the Raiders, he suffered a pretty severe wrist injury that is going to keep him out of the finale against the Chargers as well as the Pro Bowl… Pro Bowl rules stipulate that in order to have your trip/ everything paid for, you must be playing.  Let’s not let that stupid rule ruin this opportunity for Phillip and Broncos fans as well…Let’s fight for #30 like he fought for our team and get him out to Orlando!

I mean, the Pro Bowl might suck for people who have been there before plenty of times, but for an undrafted rookie who may only go once in his career, I’d imagine it means a little bit more, so here’s to hoping Phillip Lindsay finds a way to get there.