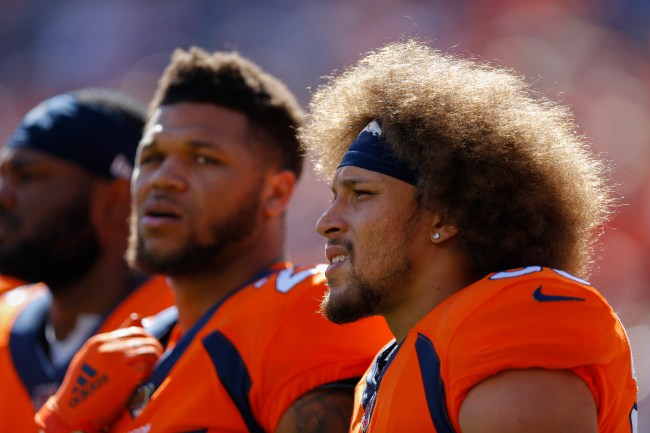 It was confirmed last night that Joe Flacco wants his running back killed. Why? I’m guessing a homicide would have taken the focus off the Denver Broncos appalling offensive performance in their 30-6 loss to the Chiefs on Thursday Night Football.

No one would then be talking about the Broncos being shut out the final three quarters of the game or Joe Flacco getting sacked eight times or going 1-13 on third downs or the offense generally looking like they just smoked a giant bong packed with all the weed in Denver.

Flacco’s homicide attempt came with 4:10 left in the fourth quarter when he inexplicably re-entered the game (much to Troy Aikman’s amusement) after the damage had already been done. Instead of running the clock out or dare I say, take a shot downfield, the former Super Bowl MVP threw a meaningless pass to Lindsay in the flat, a pass that nearly got him decapitated.

The Pro Bowl running back did not appreciate his quarterback throwing him to the wolves in a 24-point blowout, and got up in a fit of rage.

Phillip Lindsay was PISSED Flacco got him lit up 😂😂😂😂😂pic.twitter.com/nGUtg08yWc

Lindsay’s frustration was likely exacerbated by the fact that he ran for just 36 yards on 11 carries. That frustration trickled down to fantasy owners across America.

when you start phillip lindsay and damien williams today pic.twitter.com/lLynsJ2q3j

Phillip Lindsay having 8 carries for 21 yards against the Chiefs going into the 4th quarter… pic.twitter.com/kylpbI1ES4

At the time of this writing, Joe Flacco has not been charged with a crime.