Troy Aikman Was So Disgusted In Joe Flacco’s Lifeless Performance, He Started Laughing At Him On National TV 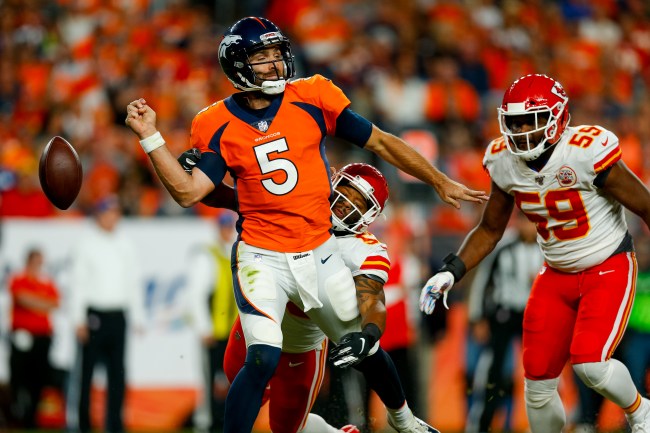 Denver is weed paradise, but unfortunately the city is fresh out of that sticky icky after it was all rolled into one giant fatty and smoked by the Broncos offense before their Thursday night performance against the Kansas City Chiefs.

That is the only way to describe how putrid and detached Joe Flacco and Co. was in their 30-6 pants-shitting on national television.

Flacco, a former Super Bowl MVP, threw for 213 yards, 0 TDS, went 1-13 on third downs, and was sacked eight times in the home loss.

Troy Aikman was a bit more pointed. Aikman was up in the booth and it seems he was personally offended by how lifeless Flacco and the Broncos offense performed.

It got so bad that with five minutes left in the fourth quarter and the score 30-6, Aikman couldn’t help by mockingly laugh at Flacco for re-entering the game in garbage time.

Aikman saw Flacco was going back out there and started laughing LMAOOOO 😂😂pic.twitter.com/ilcwtZ8peM

Aikman’s mockery was a culmination of jabs he delivered at the Broncos offense all night. Those jabs include, but are not limited to, the following:

Joe Buck: Seems like a lethargic feel to this offense.
Aikman: Well, there’s no doubt. And this is where Joe Flacco, he’s gotta be the leader. I mean, he’s been around, a Super Bowl winner. He’s in his 12th year. You know, I don’t want to be too hard on Joe, but lets get a little life out here.

Aikman: This is about as bad an offense as I’ve seen. I’m shocked there’s as many people here still at the game.

At the very least, Aikman’s utter disgust in Flacco provided some solid Twitter content in a game that provided very little.

Troy Aikman is trying so hard to be diplomatic about Flacco. He should just say it. "He sucks"

Troy Aikman seems to be physically pained by how shitty Joe Flacco is.

Troy Aikman just said this #Broncos offense is "about as bad an offense as I've ever seen."

And I'm inclined to agree with him.

“I’m shocked that there are this many people still at the game.” – Troy Aikman’s budding rage pic.twitter.com/IC2G54PA8X

Joe Flacco has officially entered a Jay Cutler level of “fuck it.”