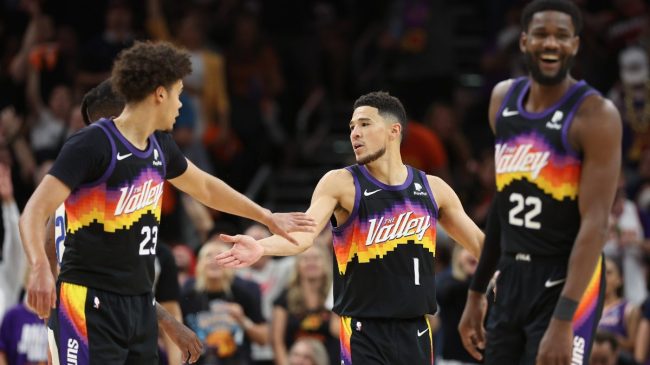 The Suns released a video on social media of the team tasting and rating a handful of well-known Mexican snacks. The player reaction was hysterical.

Cinco de Mayo, which is often mistaken for Mexican Independence Day, commemorates the Battle of Puebla which took place on May 5, 1862. The battle was part of the Second Franco-Mexican War between Mexico and France.

Today, it’s celebrated more popularly in the US than in it is by our neighbors to the south.

Those celebrations typically center around food (and alcohol), which is exactly how the Suns chose to enjoy the holiday this week.

The social media team lined up a number of Mexican snacks and got players from the team to dig in. Those that participated included guard Cameron Payne, forward Cameron Johnson, center DeAndre Ayton, and forward Mikal Bridges.

Payne and Ayton try a few snacks, including marzipan, serpentinas, mantecadas, and a Mexican candy called Lucas Mango. The reaction after tasting each is priceless.

Payne rates the mantecadas with a 9.5, comparing them to a pound cake. “Tastes like a muffin,” he hilariously replies with his mouth still full. Ayton went with the Lucas Mango, giving it a perfect 10/10.

Johnson and Bridges gave their taste-test as well, thoroughly enjoying the spread.

Gansitos landed a 10/10 from Bridges, while Johnson was a bit more reserved with his ratings. The funniest part though is when Bridges starts sneezing from the spicy Lucas Mango candy.

The tastings were an entertaining way to get the players involved with the Cinco de Mayo festivities. I’ll be heading out to pick some of these snacks up before the day is through.