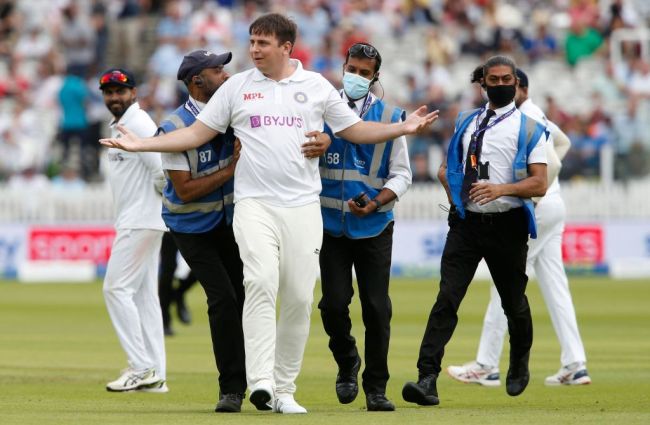 Officials at Saturday’s cricket match between India and England did not believe that a rogue pitch invader was the first-ever white Indian player. It makes sense why not.

During day three of the Lord’s Test, a tournament at Lord’s Cricket Ground in St. John’s Wood, London, a local fan wandered onto the pitch wearing a jersey with the last name “Jarvo” and the number 69.

The man, dressed identical to the Indian cricket players, casually strolled onto the pitch and began to give directions to “his team.” It took security a moment to realize what was happening at first, but they eventually escorted him off of the field.

Upon the initial convergence, Jarvo looked baffled when security asked him to leave. He hilariously pointed at his shirt, claiming that he was on the team.

The entire scene was rather funny and even Indian players Mohammed Siraj and Ravindra Jadeja couldn’t help but laugh.

Jarvo, who has been identified as professional prankster Daniel Jarvis, has done this before. He previously ran onto the field during a 2014 Tottenham Hotspur match, joined in on the 2015 British diving championships, and pretended to camp during an earlier cricket match.

A full video from Jarvo’s most recent pitch invasion shows just how easy it was. He literally just wandered into the middle of the match.

As Jarvo was leaving the pitch, with security on either side, he took a moment to soak in the roar of the crowd and thanked his Indian teammates for letting him have some fun.