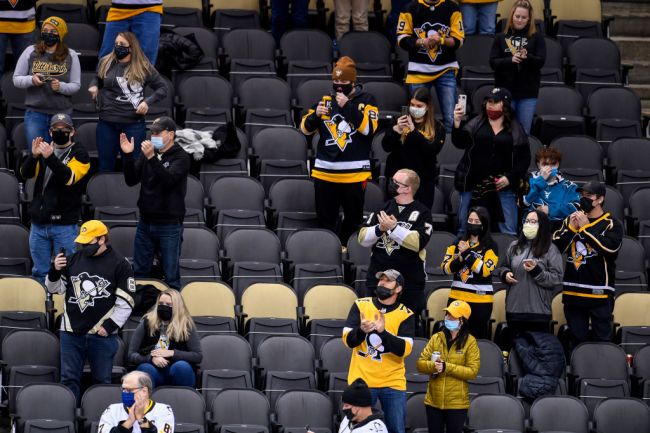 The Pittsburgh Penguins are getting flamed on social media after photoshopping masks onto the faces of fans. Tuesday’s game was the first time that fans were allowed back into PPG Paints Arena since the NHL paused its season on March 12, 2020 and not everybody in the limited-capacity crowd was properly adhering to the mask mandate. On Wednesday, the team posted a photo of the crowd with the caption, “Thanks for the continued support Penguins fans. We can’t wait to see you tomorrow night.”

We just had to say this again…

Thanks for the continued support, Penguins fans.

We can't wait to see you tomorrow night. pic.twitter.com/f3KGjhHWR0

Shortly after the team posted its thank you, a social media detective was quick to notice that the photo was manipulated. First of all, why did the Penguins think that was a good idea? Second of all, who has the time or care to look at a photo, decide that it must be edited and search Getty Images for the exact photo to compare? It seems like a massive waste of energy, but the point was made and it is not a good look for the team.

… three people in that picture have their masks photoshopped on https://t.co/WL961w1bwQ pic.twitter.com/pzMGeGHLG7

The original photo shows one fan not wearing a mask, despite the mandate, and two others not wearing their masks properly. It’s really funny that the team, knowing that there would be backlash if it posted the original photo without masks, took the time to go in and edit the two masks to be worn properly— only to be roasted for thinking it could get away with something so ridiculous during the age of social media whistleblowers and mask police. It even added a smiley face over the woman in the black mask on the left. Such a hilarious touch.

No matter what the thinking was, the team received immediate pushback on the discovery. Many fans replied with questions as to why Pittsburgh took the time to photoshop the masks, but didn’t take the time to enforce their own policy. One man named Josh was BIG mad and called for the Penguins to lose their Getty Image rights for violating its policies (he brings receipts to back up his case) and to be punished by Twitter for publishing misinformation.

At the very least (the absolute very least, considering they attempted to cover up the flouting of safety regulations), the Penguins should lose their Getty privileges for violating the photo service's content license agreement:https://t.co/Ez4s9w3YcG pic.twitter.com/XJsRJ1hyEp

There's also a case to be made that they knowingly shared virus misinformation, which would warrant discipline from Twitter itself.

One thing's for sure: The public has the right to know who ordered the doctoring of the photo, and who approved it.

What the Pittsburgh social team was very strange. There’s no denying it. They probably didn’t think they would get caught (because who cares enough to take time out of his/her day and fact check a photo for masks) and sent it. It ended up coming back to bite them, and Josh is right in the fact that the team violated its terms of agreement with Getty Images. He might even have a case for Twitter. But do we really care that much?

Yeah, it’s weird. Yeah, it’s comical. Having a laugh at their expense or questioning the team’s ability to mandate the mask seems like a perfectly reasonable response. To demand knowledge of who ordered the doctoring of the photo and who approved it seems like a little bit much. What are you going to do, place their heads on a pike and parade them around the city?