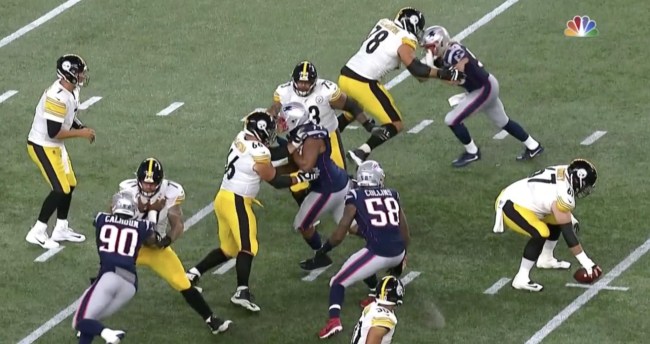 The Pittsburgh Steelers had a rough night after taking a beating from the New England Patriots all night.

The Steelers night got worse when starting center Maurkice Pouncey had to leave the game with an injury and was replaced by BJ Finney.

Unfortunately for Finney, had an embarrassing moment when he forgot to snap the ball in his first drive of the game

Every Steelers lineman except for Finney was called for a false start on the play.

"False start, every offensive lineman EXCEPT for the center." 😂#PITvsNE pic.twitter.com/laUBA7JIJa

False Start: “All linemen except for the center”

Hate to see it.

"False start. All the linemen instead of the center."

The #Steelers' night in one penalty.

Did the ref really just call a false start on all the lineman except for the center. pic.twitter.com/qC2bgjeblp

"False Start. Offense. All the Lineman, except for the Center."

Boi, I might not EVER forget that quote and this moment!!! https://t.co/xx628Oj0Ua

"False Start: Everyone except the center."