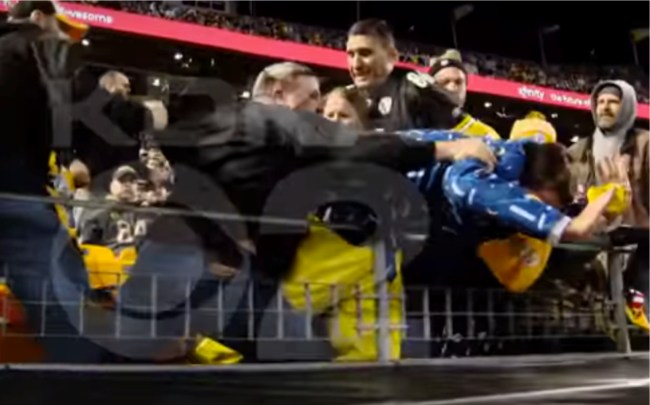 A male Pittsburgh Steelers fan was caught by cameras choking a pregnant female Los Angeles Chargers fan during the teams’ Sunday Night Football game, in which the Steelers lost on a last-second field goal, 33-30. It’s as disturbing of an image as you’ll see at any sporting event, and the entire thing was captured on video. Here’s the disgusting incident, as posted to CBS Pittsburgh’s YouTube channel.

According to the New York Post, the situation happened when two men were arguing in the stands at Heinz Field, and the female Chargers fan stepped in. It was at that moment that the Steelers fan turned and choked her.

Regarding the disturbing incident, the Pittsburgh Steelers released a statement, per the New York Post piece:

“We strive to make events at Heinz Field safe for our guests,” the Steelers said in a statement. “This type of behavior seen in the photo is unacceptable and something we do not condone on our property. We are working with Heinz Field security as well as local authorities to gather more information on this particular incident as the Pittsburgh Police determines whether or not to press charges, and we will ensure those involved as the aggressors will not be permitted back into our stadium.”

Unfortunately, this wasn’t the only fight between fans that took place during the Pittsburgh Steelers-Los Angeles Chargers game, as two other men were seen arguing as well, with a viral video surfacing of one man headbutting the other. While any fight at sporting events is uncalled for, when one involves a woman — especially a pregnant one — that’s where things get disgusting.

If you have any details regarding the choking incident, make sure to contact the Pittsburgh police department, because the scumbag perpetrator needs to be caught. As for sports fans, it’s time to get over yourselves and refrain from things like this, because we’ve seen it far too often happening, and this one just crossed the line in a major way.