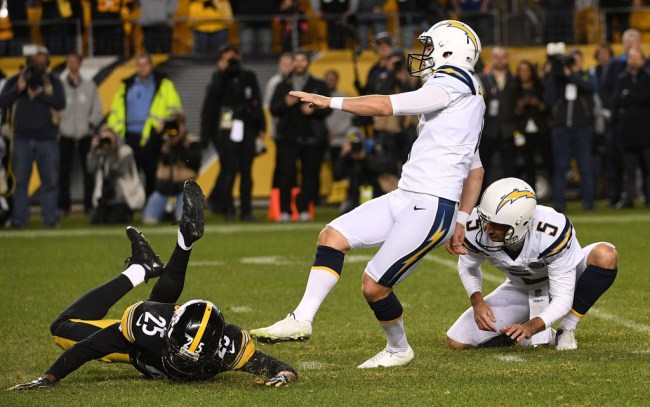 While the Pittsburgh Steelers were acting like a rage-quitting Madden player, jumping offsides three times as the Chargers attempted their game-winning field goal Sunday night, the team’s fans in the stands were displaying a heavy amount of anger as well.

The unusual part of the Steelers’ fans rage, however, was that, rather than being directed at some Chargers fans (I know, they don’t actually exist anymore), their rage was directed at one another.

Had this happened after the Steelers gave up a 23-7 lead and handed San Diego Los Angeles three tries at a field goal to beat them, the Steelers’ fans anger bubbling over might have made some sense.

Especially since it appears that the Chargers’ long-snapper drew the Steelers offside.

But no, this Steelers fan fight took place at some point prior to that occurence. What set them off is anyone’s guess.

Watch as a fan in a Steelers hoodie goes HAM on a guy in a Troy Polamalu jersey, delivering a very solid headbutt and then landing a solid right hand, all while fending off a woman in an Antonio Brown jersey and being held back by a dude in a Maurkice Pouncey jersey. (Yes, these folks spent a lot of money at the NFL Shop.)

Steelers fans are having a great time tonight pic.twitter.com/CThjIu3iLc

Polamalu definitely got the worst of that exchange. Bro got bloodied up and it appears that he ended up being the one escorted out.

Protip: If you are sitting in a section of an NFL stadium filled with people wearing the home team’s jersey, watch your back.