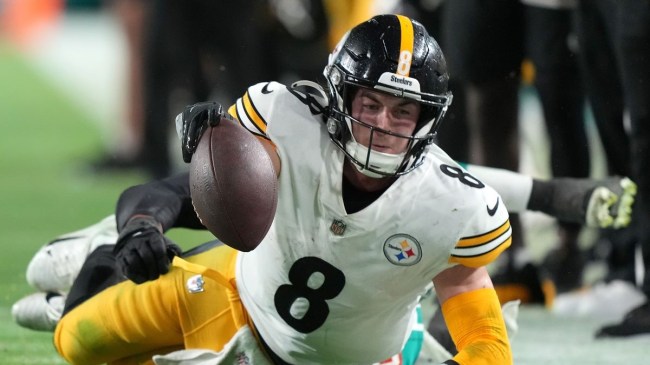 The Pittsburgh Steelers currently range somewhere between bad and very bad on the NFL team quality scale. After a difficult season a year ago and Ben Roethlisberger’s retirement, Pittsburgh was always likely to be in rebuilding mode.

But the season has been tougher than some even expected.

Injuries to defensive superstars T.J. Watt and Minkah Fitzpatrick haven’t helped the Steelers currently sit at 2-5 and at the bottom of the AFC North.

One reason for excitement for Steelers fans was supposed to be the promise of rookie quarterback Kenny Pickett. Pittsburgh drafted Pickett, who played college ball right down the road at Pitt, with the 20th overall pick in the 2022 NFL Draft.

Hooray! All is well in the Steel City, right? Ehhhhh.

Pickett has struggled mightily in his four appearances thus far. He’s averaging 192.8 yards per game and has thrown for just two touchdowns compared to seven interceptions.

It’s a small sample size, but enough to have some Steelers fans already jumping ship.

Pickett played solidly for much of Sunday night’s game against the Miami Dolphins. He did enough to keep his team in the game and had the ball with a chance to take the lead with under five minutes remaining.

But a pair of penalties backed the Steelers up to 3rd and 16 and then Pickett committed a cardinal sin.

Pickett forced a ball over the middle that Dolphins safety Jevon Holland picked off. But Pickett would get another shot. Miami failed to take much time off the clock and punted it back to the Steelers. Pickett did will to drive his team deep into Dolphins’ territory and time wound down.

But yet again, a huge mistake ended any hopes of a comeback.

Igbinoghene for the win!

Pickett rolled out left with 25 seconds to play and rather than run and get out of bounds or throw the ball away, he tried to force a pass to Diontae Johnson. Instead, Miami DB Noah Igbinoghene stepped in for the interception, sealing the game for the Dolphins.

It was Pickett’s third interception of the game, and fans were not happy about it.

I’ve seen ENOUGH… Pickett is not it!!! Take a page out of Panthers book and tank for a QB PLEASE!!!!! #HereWeGo

Pittsburgh sports writers are thrash just like Kenny Pickett, if only Joshua Dobbs had received the same leeway and understanding… 🤷🏾‍♂️@steelers #HereWeGo

Last night I saw Kenny Pickett struggle to throw when it was drizzling in Miami. I would hate to see how he plays at home after thanksgiving #HereWeGo #FantasyFootball 👀🍿🥤

Things may be going great on one side of Pennsylvania, but they’re absolutely going through it in Pittsburgh.