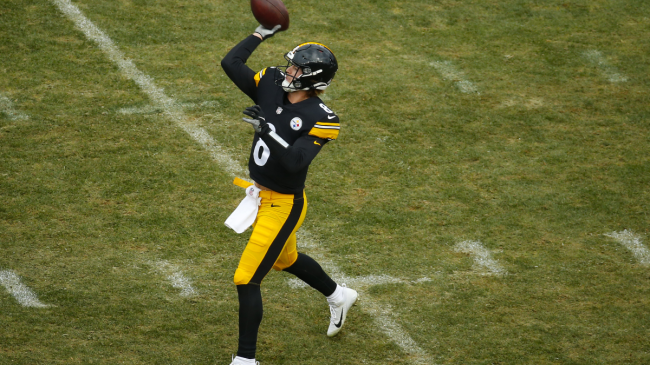 The Pittsburgh Steelers will see a new face under center in next Sunday’s matchup with Buffalo.

The Steelers are expected to move forward with rookie QB Kenny Pickett, sources say, as the first rounder is set to replace Mitch Trubisky in the lineup. Pickett saw his first action on Sunday and is slated to be the QB moving forward.

Kenny Pickett took over at halftime and coach Mike Tomlin — who addresses reporters tomorrow — said “we needed a spark.” Pickett went 10 of 13 for 120 yards with 2 rushing TDs and 3 INTs. And now will get plenty more opportunities.

Pickett made his debut last week in a loss to the Jets. After entering with the Steelers trailing 10-6, Pickett led the Pittsburgh offense to a pair of second-half touchdowns. Unfortunately, the Steelers would relinquish a 20-10 fourth quarter lead, falling 24-20.

Still, Pickett certainly provided a needed spark to an offense that had scored just four touchdowns over three and a half games under Mitch Trubisky. Fans are ecstatic to see a change under center, and they’re letting it be known on social media.

Steelers fans have been calling for this move after seeing the subpar offensive performance posted over the first few games. Apparently, the coaching staff has seen enough from their first-round pick to make a move.

Unfortunately, Pickett won’t be able to ease into his professional career as Pittsburgh plays the Bills, Bucs, Dolphins, and Eagles over the next four weeks.

Still, fans are hopeful that he can turn things around in the Steel City. Check out the immediate reaction from Steeler Nation below.

Some fans might be getting a little ahead of themselves as they hope Pickett can lead the organization to a Super Bowl title in the near future.

It will certainly be tough sledding over these next few weeks, but Steelers fans appear to be excited about the future with Pickett in charge.