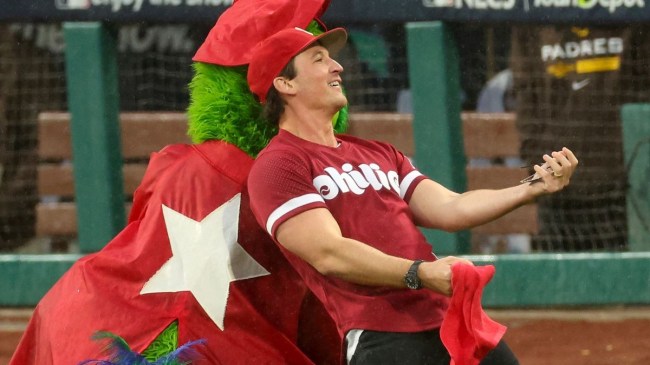 The city of Philadelphia was in a state of sheer and utter chaos on Sunday night after its beloved Philadelphia Phillies improbably reached the World Series.

Philadelphia didn’t sneak into the playoffs until the last week of the regular season but from that point on the Phillies have been downright dominant., Their run began with a 2-0 sweep of the St. Louis Cardinals in the Wild Card round. Philly then ousted the reigning World Series champ, Atlanta, 3-1 in the NLDS. The Phils capped off their run to the World Series with a 4-1 series win over the San Diego Padres.

Overall, the Phillies are 9-2 in the postseason and have yet to lose at Citizens Bank Park.

However, Sunday may have been the most improbable of those nine wins yet. Philly completed an epic comeback on Saturday to set itself up with ace Zack Wheeler on the mound for the potential closeout game. Wheeler was excellent, allowing just one run in six innings of work.

But all his hard work came undone in the seventh inning. With rain pouring down and the MLB refusing to stop the game due to ridiculous scheduling, Phillies’ star reliever Seranthony Dominguez uncorked three wild pitches and San Diego took a 3-2 lead. Dominguez had just two wild pitches in the entire regular season.

After a scoreless bottom of the seventh and top of the eighth, reigning NL MLV Bryce Harper stepped to the plate and did this…

Philly then worked around two base runners in the ninth to close it out and send the city into chaos. The parties stretched are and wide and even included some of the city’s biggest celebrities.

Angelo’s is perhaps the most famous pizza place in Philly. At least when it comes to slice shops (do yourself a favor and visit Pizzeria Beddia, you can thank me later).

So it only makes sense that it would host maybe Philly’s biggest Hollywood star (Bradley Cooper might argue) for some celebratory shots.

Teller rose to stardom for his leading role in the Oscar-nominated drama Whiplash in 2014 and most recently started in Top Gun: Maverick.

The Downingtown, Pa. native is a massive Phillies fan and was in the ballpark for the closeout game.

Rooster @Miles_Teller from Top Gun getting the people crazy at CBP

Meanwhile, the massive Philly energy of him in Angelo’s has inspired this writer to go grab a cheesesteak for lunch.