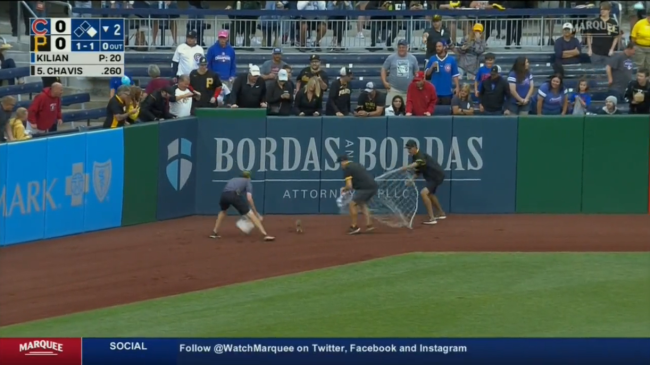 The life of a member of a Major League Baseball team’s grounds crew is a unique one. In addition to having to fight the elements, and in some cases lose the battle, they are also often tasked with tracking down and catching various furry creatures that wander their way on to the field.

All of which, by contrast, is very entertaining to the fans in attendance any time one of these unusual and trying circumstances arises.

"Tremendous base running out of that cat." 😹

Credit to the cat or blame to the grounds crew? pic.twitter.com/u1fK6aEsAx

Chasing down a stray cat that somehow got on to the playing field during a Major League Baseball game (how did those cats get out there?!) is one thing, trying to corral a squirrel is a whole different ball of wax.

Think about it. Have you ever tried to corner a squirrel? Or even get within five feet of one? Not only are they skittish as hell, they’re faster than Usain Bolt with the ability to stop on a dime and change direction in a flash.

There was a brief “Squirrel Delay” at the Cubs/Pirates game in Pittsburgh! 🐿😂 pic.twitter.com/CrlJjuTr9O

Making this squirrel chase even more entertaining than it really should have been were the various play by play calls of the action on the field.

Nice Christmas Vacation and UP references. And did someone mention The Benny Hill Show?

We might have to ask @ThePoniExpress what he thinks of this squirrel’s moves after juking out the Pirates staff: pic.twitter.com/6q00ZJkA94

Here’s another look from the stands…

Lol. Squirrel on the field at the @Pirates game. It escaped to the bullpen! pic.twitter.com/nOtO9Tv3v0

Major League Baseball, if it really wants more fans, should really just release some sort of small, furry animal on to the field at least once a game. It would be far more entertaining than those mascot races we’ve all seen a thousand times. Just look at these reactions to the squirrel!

The most exciting thing I’ve seen at PNC all year

That squirrel is gonna be a top-3 running back this season. #Steelers #Pirates

Pirates have just named that squirrel as their new baserunning coach.

Everyone has to bring a live squirrel to the next Pirates game.