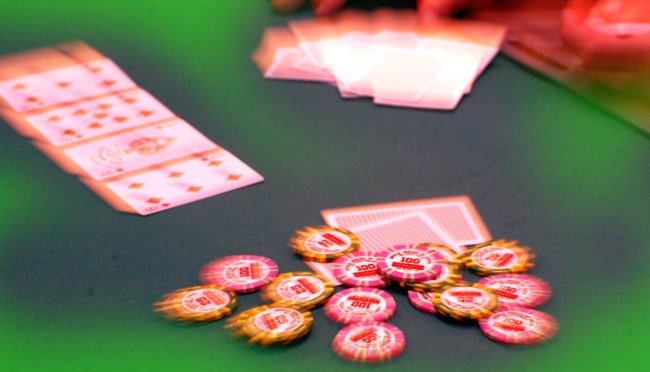 Ken Strauss, the poker player who made news back in July when he was kicked out of the 2019 World Series of Poker main event, for dropping his pants, including his underwear, then removing his shoes and throwing them at the table, hitting the dealer, was just arrested on terrorism charges.

You truly can’t make this stuff up, folks.

Uhhhhhh what is going on at the #WSOP main event??? Player shoves blind, drops his pants, then throws his shoe on the table 😂 😂 😂(video via @blattsmullet) pic.twitter.com/oHGk5pjlnJ

Fast forward a couple of months and the 45-year-old Pittsburgh native is once again back in the news, this time for making terroristic threats – a category-B felony – against the Venetian Resort casino in Las Vegas.

This is one of the threats that got Strauss in hot water again.

Shootings are taking place all over Las Vegas. Please leave me alone @VenetianVegas I have no place to go currently. And all Casinos that have me banned will be destroyed effective immediately. And @Rio, get my belongings together immediately when @POTUS declares safe I’m going.

According to his arrest report, obtained by PocketFives.com…

LVMPD originally received a phone call from the Trump Tower Hotel in Las Vegas after Strauss checked in on July 27 and told employees there he was “offering to pay an extra $300 to get a room for the night.” He told hotel employees that he had been “kicked out” of the Red Rock Hotel. Despite concerns, Trump Tower management allowed him to check in to a room.

LVMPD then contacted Red Rock Hotel management and obtained a copy of a security report regarding Strauss and learned that on July 24, Strauss allegedly “attempted to lure an eight-year-old child while at the pool”. Red Rock security made contact with Strauss to hear his side of the story and he told them that “he was approached by the boy and provided him with his room number and told him to have his parents meet him in his room”. Red Rock decided to have him trespassed from the property.

Tonight I had the honor to meet @WWE_MandyRose. And she’s definitely going to be a future multi-time WWE Women’s Champion!Thank you Golden Goddess! #WrestleMania pic.twitter.com/M9zEjwuh1G

Included in the arrest report was a detail about an unnamed private investigator who had informed Red Rock he had been hired to investigate threats Strauss made against a Los Angeles Rams reporter. The report redacts the name but Strauss has several tweets referencing or directed at Sarina Morales, an LA Rams reporter. The investigator told Red Rock security Strauss believes Morales is “his daughter from a relationship when he was 11 years old” and that Strauss had shown up at several events across the country where Morales had been working.

Nope. Not done yet.

In addition to his tweet about the Venetian, Strauss allegedly called the hotel, where he was a guest, and told them he “would harm anyone who comes near him and would also harm himself.” When police went to look for him, he had left the premises and gone to the Trump Tower Hotel because, as he told told LVMPD officers, “President Trump is his uncle.”

Michelle Call me 702 521 8183, I need you badly. I am starting to have feelings for another girl who I might have gotten Pregnant last week. Stupid unsafe sex. No one else contact me or message me anymore or else.@POTUS

He also told police that after he exposed himself at the World Series of Poker he went to play poker at the Luxor where he climbed onto a craps table and exposed himself again. When he was kicked out of that casino he “pulled his pants down and urinated on the sidewalk of the hotel.”

Strauss was booked on $150,000 bail in Clark County, Nevada on a charge of making threats or conveying false information concerning an act of terrorism.

Wow my ❤️life has taken an interesting turn of events. I’m really sorry for all the apparent false Tweets. And you know what, I’m a sick fuck! I’m happy our 13 year old is dead! Keep killing the Children! @POTUS