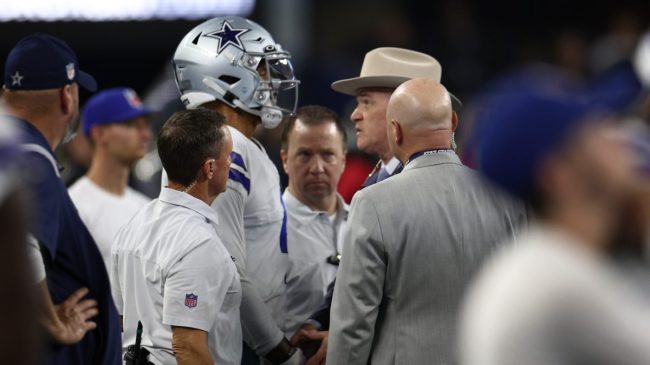 The Dallas Cowboys are, simply put, a complete disaster.

After going 12-5 and winning the NFC East in 2021, Cowboys owner Jerry Jones and general manager Stephen Jones allowed the team to fall into disarray.

The team traded star wideout Amari Cooper to the Cleveland Browns for pennies on the dollar. That combined with a torn ACL for Michael Gallup led to an embarrassingly thin wide receiver depth chart.

Dallas also let starting right tackle La’El Collins walk in free agency and did nothing to replace him. When future Hall of Fame left tackle Tyron Smith went down with an injury (again), the Jones’ shoehorned rookie Tyler Smith into his spot.

This is despite Smith taking zero preseason reps at any position other than left guard.

So it should come as no surprise that the Cowboys looked like the worst team in the NFL on Sunday night against the Tampa Bay Buccaneers. Dallas lost to Tampa, 19-3, and the game wasn’t remotely that close.

Cowboys fans are already planning for the 2023 NFL Draft. And it appears at least one sportsbook is joining them.

Prior to the season, Pointsbook listed the Cowboys’ over-under for wins at 9.5-10.5 depending on when you took the bet. Seventy percent of those bets were on the under.

Now the sportsbook is already conceding the loss to the those bettors.

PointsBet announces they are paying out people who bet on Dallas under of 9.5 to 10.5 regular season wins in light of the Dak surgery. 70% of the handle was on the under. https://t.co/3vHKDlc0Ij

A number of fans were confused by the news. But the prevailing theory makes a whole lot of sense.

Full amount. They are taking a small gamble that the under is going to hit anyway, and to have those people blow their winnings sooner rather than later

The payout figures to be pretty significant given the continually growing sports betting market in the US.

But there’s no use waiting out the inevitable.