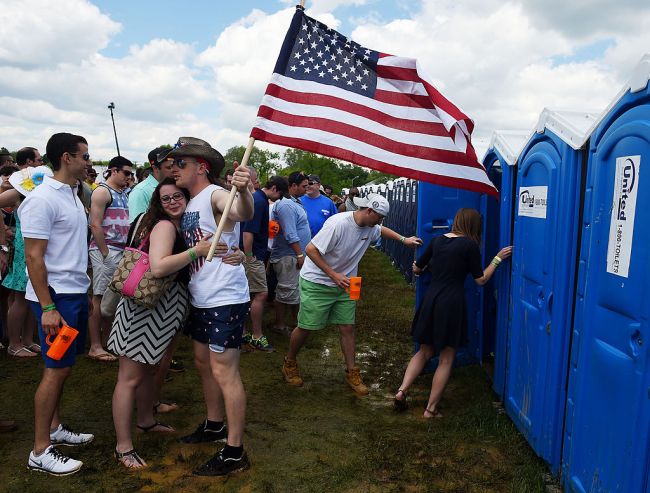 As Saturday’s Preakness Stakes pits the top horses in racing against one another, things are going to look different. While the second-leg of the Triple Crown is set to run as scheduled, the infield won’t be packed. Of the three races, the Kentucky Derby and the Belmont Stakes are more reserved. In Baltimore, it’s a party for the Preakness. Or as it has been dubbed, “The Freakness.”

Here is the after-movie for the most recent race with full-capacity in 2019. Madness.

For those in attendance, rain or shine, the day begins early in the morning and ends well after the final race has run. Thousands upon thousands of alcohol-fueled, costume or pastel-donned folks pack the infield for an afternoon full of high-profile concerts and debauchery.

A big crowd along Rogers Avenue heading into Preakness infield at 1p pic.twitter.com/DQ2WNoJWwF

Plenty of time before the Preakness Stakes, but it's already too cosy in the infield (📷 by @worldREDEYE) pic.twitter.com/1zV8BZ2pRH

Some guys just can't handle the Preakness Infield! They got their Preak-On quickly as photo was taken at 1:34pm! pic.twitter.com/hzvb7PC1W5

One particular portion of the drunken insanity is an esteemed tradition at Pimlico Race Track in Baltimore, Maryland. While thoroughbred horses race around the infield, the biggest race of the day used to take place on the infield.

Once upon a time, back in the early 2000s, attendees could bring their own alcohol into the event. They brought a lot of it. Furthermore, Port-A-Potties used to be lined up in long rows in the infield. The combination of the two led to one of the most infamous traditions in the history of day drinking.

The “Running of the Urinals” at the Preakness saw people — mostly intoxicated men — run atop the rows of toilets. Onlookers would hurl beers in their direction and videos of the event began to surface with the rise of smart phones and YouTube.

Here are a few highlights:

This is perhaps the most famous video of them all. Just look at the amount of beers being thrown at him!

Videos that surfaced got national attention, and the Maryland Jockey Club thought it gave the Preakness a bad image.

The Fall and Return of the Running.

Leading up to the 2009 Preakness, Pimlico announced that the event was no longer B.Y.O.B., and they tried to better spread out the toilets. It still only costs about $20 for bottomless beer, but there is no funneling or shotgunning. In addition, any liquor on the grounds is whatever you can sneak in a flask (or two).

However, the infield is still just a giant party. It just isn’t quite what it used to be. With that being said, the Running of the Urinals has returned in recent years. Authorities just kind of turn a blind eye.

Another great effort at the toilet run yesterday #Preakness pic.twitter.com/a7djqcRyLz

How about this lady going full-send and getting WRECKED!

Decent elevation but lacking all-important distance – we understand this lady not seriously hurt at @PimlicoRC after being egged-on for a bit of racecourse acrobatics via the Portaloos. Don't try this at home! pic.twitter.com/w3JvZihJvq

Take a look at this dude stumbling around with absolutely no sense of balance. He was the most recent participant.

Gone are the days of complete anarchy, but the party rages on. It will be different this year without a packed, shoulder-to-shoulder infield. Without the brave souls to test their agility on the Port-A-Potty course, we can only salute those who have come before.