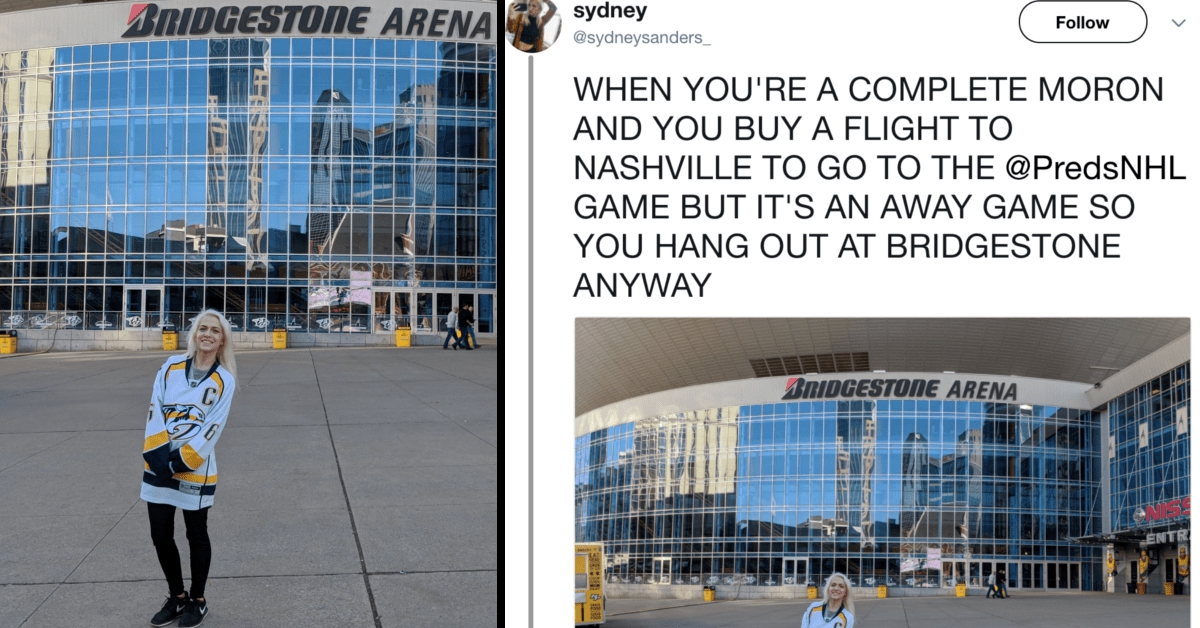 Pro Tip: If you want to see a Nashville Predators game in Music City… don’t go to Bridgestone Arena while the Preds are playing against the Devils in Newark, New Jersey. Unfortunately, Sydney Saunders (a Preds fan living in Philly) learned this lesson the hard way when she took a Trip to Nashville this week.

WHEN YOU'RE A COMPLETE MORON AND YOU BUY A FLIGHT TO NASHVILLE TO GO TO THE @PredsNHL GAME BUT IT'S AN AWAY GAME SO YOU HANG OUT AT BRIDGESTONE ANYWAY pic.twitter.com/dzgjoZassd

As a Preds fan, I love that Sydney took a trip to Nashville and rocked her road (Shea) Weber jersey at Bridgestone even though there isn’t a game. As a person with a brain on the internet, I have a hard time disagreeing with her self-proclaimed title of a complete moron. When you’re looking for a game to book your trip around… it’s pretty fucking pivotal to check the very clearly labeled schedule on NHL.com. 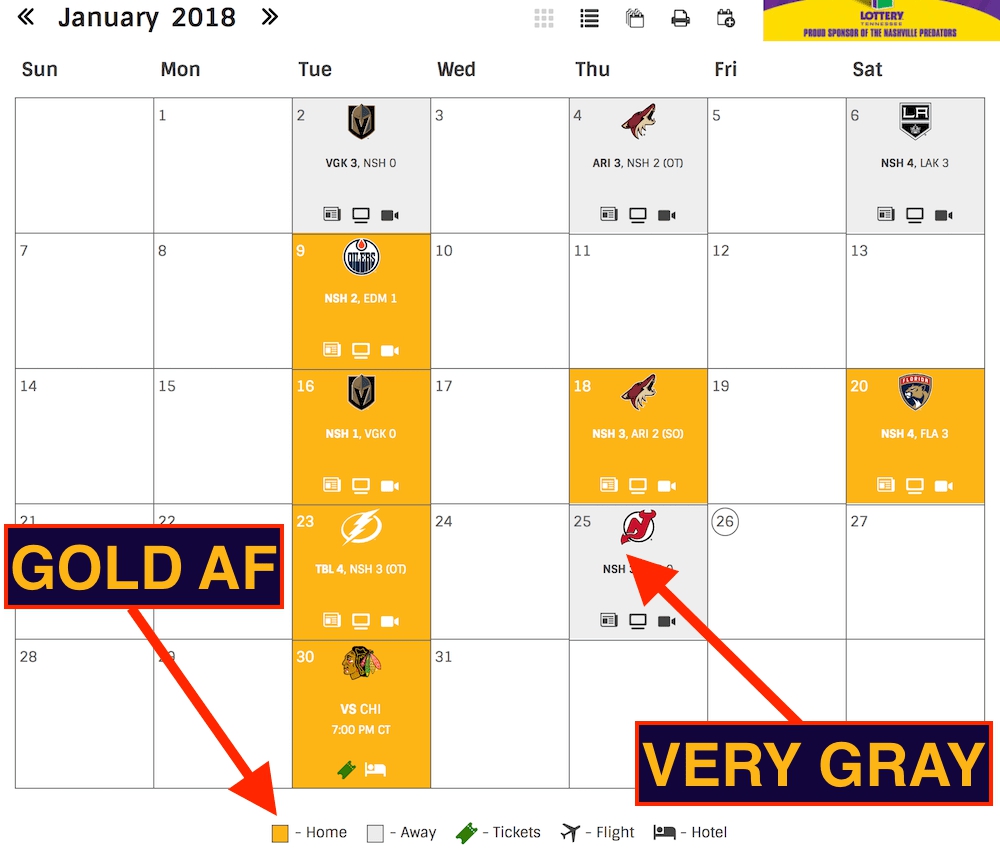 So, Sydney, if you’re reading this – I’ve made a catchy and helpful rule for you: if the game is gray… the team is away.

BOOM! You’re welcome. However, I’m not the only one who took pity on Sydney. Homegirl made a very dumb mistake but she came out of this debacle far from empty-handed. After she tagged the Preds in a tweet that showed her rocking a Nashville Shea Weber road jersey outside an empty Bridgestone Arena, the team’s social media manager took action.

You still out there??

Don't move. We're bringing you something. 👀

LOOK AT WHAT I GOT Y'ALL 😭💛 pic.twitter.com/arzUF3GKd4

Hooked up with a swag bomb. Classic. I won’t lie, I’m jealous of that Loyal Legion Member scarf – I gotta get my hands on one of those. Also, I think it’s HILARIOUS they gave her a schedule.

While Sydney appeared thankful and appreciative, she definitely took some punches online. Which is fair… you can’t show off your fuck up, get a free gift basket because you made a dumbass mistake, and expect to not get trolled on the interwebs. Here are the best tweets of people throwing shade her way:

okay but you don't have to be rude

you don't have to be rude

ok you don't have to be rude you jerk

Wow tell me more you must be such a fan… https://t.co/rkRZGbtbRs

“The moose out front should’ve told you we were closed” pic.twitter.com/6c3QldLEV3

My personal favorite – a nice jest at human piece of shit and Flyers defenseman, Radko Gudas:

Is it a sign that says “I hate Radko Gudas”?

I think it’s safe to say Sydney’s favorite word is “rude” and she’s not very experienced in dealing with internet haters.

Internet people are so dang mean for no reason

But she can laugh all the way to the bank because this is a fairytale ending for a story that includes a massive fuck up. It’s not like she was left hockey-less in fucking Winnipeg, Manitoba or anything. She was in downtown Nashville and if you can’t have fun there, you can’t have fun anywhere.

Plus, she went semi-viral and even got local news coverage:

Anyway, an unfortunate lesson to learn but makes for a great story. I’m just glad to see the Preds got a win in New Jersey and our network of fans is growing, extending from Bumfuck, Tennessee to Philly and beyond.