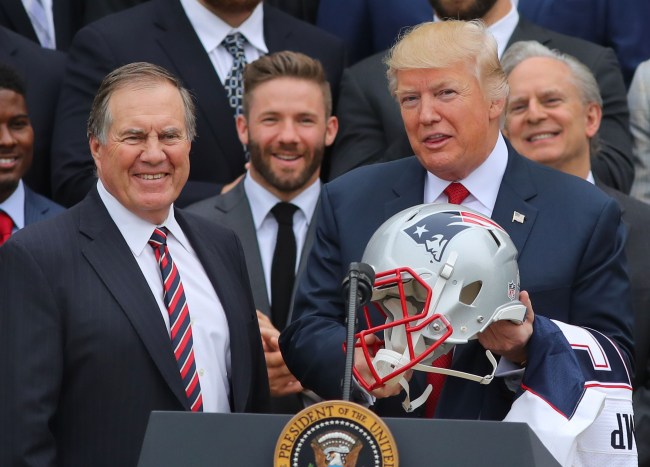 President Trump is currently in turmoil after last week’s US Capitol riot but he plans to use his final days in office honoring those close to him.

On Sunday Politico reported that Trump is planning to honor New England Patriots head coach Bill Belichick with the Medal of Freedom on Thursday.

With just days to go in office and facing calls to resign, President Donald Trump is planning to spend the upcoming week taking a ceremonial victory lap and making last-minute use of his presidential powers.

A spokesperson for the Patriots did not immediately respond to a request for comment.

Belichick currently serves on the President’s Council on Sports, Fitness and Nutrition and once wrote a letter to Trump during his 2016 Presidential campaign.

It’s currently unclear if Belichick will accept the Medal Of Freedom considering everything that’s going on in Washington.

Will Belichick accept is the question. https://t.co/jssg9wgYus

Will Belichick accept the award from @POTUS Trump?

Has he already accepted it? https://t.co/tPIqgvjw7R

@Patriots, are you seriously going to let Belichick continue to be a loser this season and accept a meaningless medal from a traitor? Maybe we should change our mascot to a redcoat/loyalist for King Trump.